We hope you are well and that you and yours have not suffered first-hand the horrible effects of Covid.  Alfonso and I are well, our privileged seclusion in the depths of rural Salamanca having had many benefits, not least a most remarkable spring with birds coming close to the house and the surrounding countryside free of the influence of sheep and cows eating up all the amazing wild flowers including fields of orchids.. (see last blog).

The wet spring and early summer brought bumper cereal crops and plenty of good breeding places for the Hen and Montagu’s harriers, so many hours were spent in the field locating nests, but lack of support from the authorities meant once again spending valuable time finding and convincing local farmers not to harvest before the chicks fledged - the Montagu’s in particular as they are late breeders – and in some cases to no avail: some farmers failed to notify in time and nests were lost to the harvester. 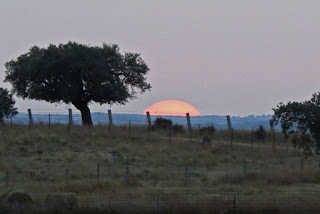 The heat of July and August and the influx of unmasked visitors to the villages from Spain’s capital cities kept us indoors most of the summer, avoiding the crowds, and venturing out for people-less walks in some of our favourite spots. 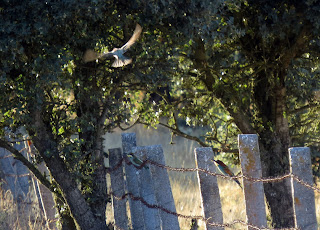 During July David Lindo came over to resume the Fam trip which had to be suspended in March because of Lockdown.  I took him to the Sierra de Francia and Arribes area, and I’m sure he was pretty impressed..
By mid July the Montagu’s chicks were almost ready to fledge, but the farmers wanted to harvest, so it was time to go in and fence off the nesting area to protect them..
Alerted by a birder friend we went to see a large group of stone-curlew as they gathered near a pool.  These pools, often artificially made for the cattle to drink, are a great place to watch as they can attract Sandpipers and Kingfisher amongst many other birds.. 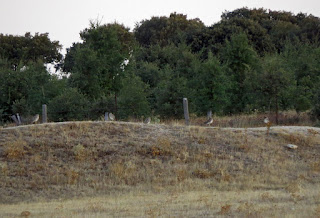 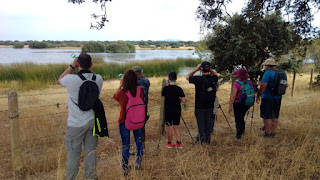 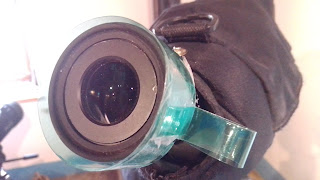 Home-made safety cover for scope
In November we had a lovely long weekend away in the Sierra de Francia, with long walks on moors and in chestnut and arbutus forests, not far from home but just what was needed. 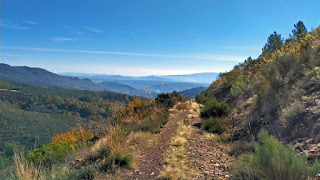 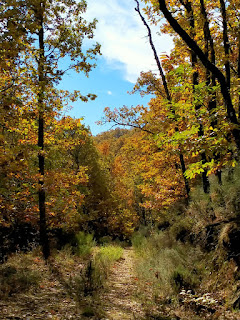 Now the Cranes are back though in lower numbers, having had an unsuccessful breeding year due I believe to drought in the north.  Many couples are without chicks.  We saw one individual which was ringed: it turns out it’s from the Czech Republic. 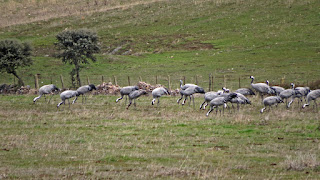 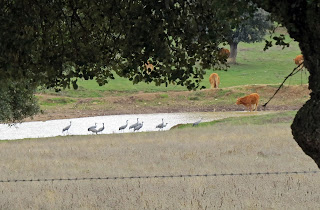 This has been a difficult year for all: let’s hope that in 2021 we can put this behind us and work to heal the planet enjoy living in harmony with its inhabitants.

Stay well and have a happy festive season!

Posted by Birding in Spain's Wild West at 12:27 am