We picked up Edward and Mandy at Hotel Salvatierra Rural in the village of Salvatierra de Tormes, where we saw Spotless starling (which, singing from the hotel terrace act as sustainable alarm clocks!), Iberian shrike and Greenfinch.
Our first stop was up the Sierra de Bejar mountain at the ski station of La Covatilla, and on the way up we saw a pair of Cuckoo furtively flying off. From the here we were able to observe the busy comings and goings of Bluethroat, Whitethroat, Northern wheatear, Linnet, White wagtail, Water pipit, Dunnock, Ortolan bunting, Swift, Wren, Booted eagle, Griffon vulture, Black kite, Red kite, Thekla lark, and Skylark.
They were either defending territory and singing, hunting food, or practising flight in the case of the young Linnets. 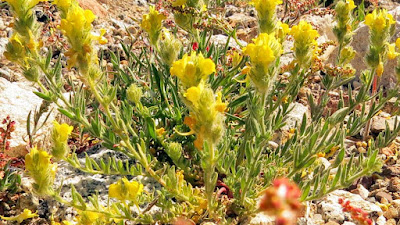 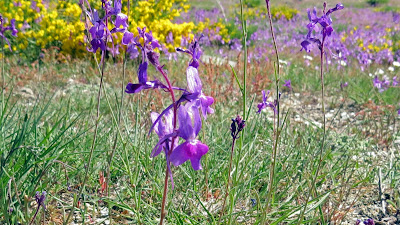 We saw beefly Parageron incisus and a Bodega Darkling beetle, Blaps lusitanica, under some vegetation.
We then drove a little way around the mountain to Candelario for a cup of coffee in the square and to see the colony of Pallid swift alongside common Swift. On our way we saw Hoopoe, House sparrow, Carrion crow, Crag martin, House martin and Barn swallow.
From here we headed up the mountain and stopped for our picnic lunch in El Travieso, sheltered from the sun and wind by a carport. Here Edward caught a glimpse of Western Bonelli’s warbler, and Coal Tit and Bluetit were also seen. On the way up we saw Latticed heath moth Chiasmia clathrata and Marsh fritillary Euphydryas aurinia feeding on Armeria. After lunch we continued up the mountain, stopping to look at Robust marsh orchid Dactylorhiza elata, Linaria elegans, and the daisies: Leopard’s bane Doronicum carpetanum and Moon daisy Leucanthemopsis pulvurelenta, both Iberian endemics. There was also an unidentified invertebrate on a lichen-covered rock. 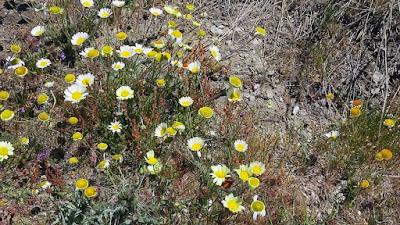 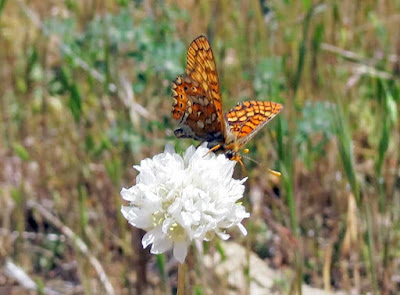 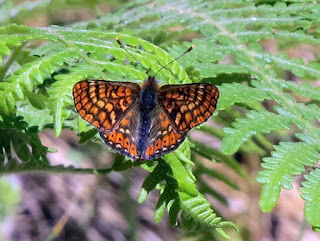 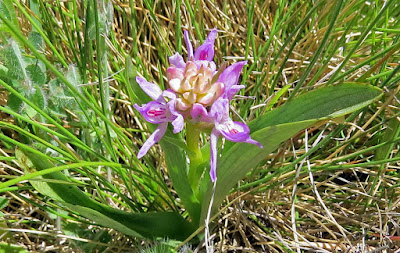 From the carpark we saw Rock bunting and Stonechat and heard the Quail singing, however it was very windy and so we decided to have a short walk in the woodland of La Dehesa, where we heard and glimpsed Western Bonelli’s warbler, and saw Grey wagtail, Kingfisher, Blackcap, Nuthatch, Serin, Chaffinch, Goldfinch and Greenfinch, followed by a brief stop at the Pine forest above the Reservoir of Navamuño, where we also saw Rock bunting and spotted Rhagium inquisitor, a well-named inquisitive Ribbed pine borer on the car window. 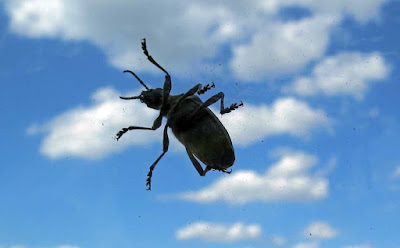 Wednesday 1st June Sierras de Bejar and Francia
From Salvatierra we headed southwest to Horcajo de Montemayor, in the Sangusin valley, on a semi-overcast but pleasant morning –clouds being a welcome change from too much sun - seeing Raven, Black kite and Golden oriole on the way. We watched Spanish pond terrapin Mauremys leprosa and Iberian green frog Pelophylax perezi from the bridge, then went to a Narrow leaved ash grove Fraxinus angustifolia and heard our first Scops owl of the year, as well as Green woodpecker, Golden oriole and Mistle thrush.

We inspected flowers and insects: a female Ruddy darter Sympetrum sanguineum resting on a tree branch; Mandy discovered stunning Spurge hawkmoth caterpillars Hyles euphorbiae on a Euphorbia oxyphylla, and Alfonso pointed out what looked like a hornet’s nest but turned out to be Mammoth wasps Megascolia maculata around a semi-rotten ash tree. He found a dead male: the head is black. We also found a Scorpion fly Panorpa communis. The foxglove Digitalis thapsi, endemic to the Peninsula, was in full flower along with Spanish lavender, Lavandula pedunculata. 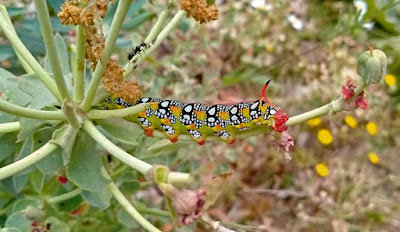 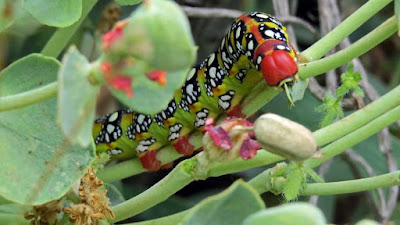 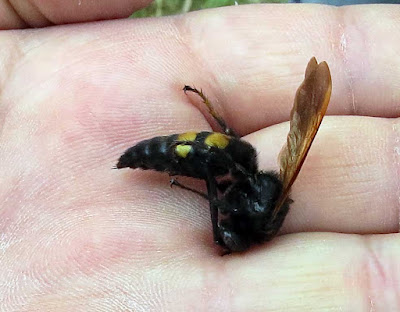 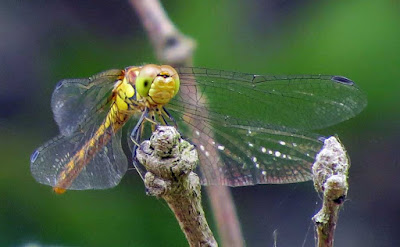 Meanwhile we were surrounded by Bee-eaters doing their acrobatics or perched on nearby trees, Rock sparrows squatting the old Bee-eater colonies, and other birds such as Serin, Swift, House martin, Mistle thrush, Spotless starling, Raven, Black kite, Red kite, Booted eagle and White stork.
We had a look around the village of Pinedas, and by chance were in time to rescue a Salamander Salamandra bejarae from an elderly neighbour with malicious intentions: she declared that it had to be killed because it was trying to get into her house. I told her we should do no such thing and that they were very useful creatures as well as protected by law, and we promptly took it to the other side of the village where we released it close to an abandoned and damp outhouse.
We carried on towards the Alagon valley, stopping by the bridge to look at the Daisy-leaved toadflax Anarrhinum bellidifolium, and the endemic Creeping snapdragon, Antirrhinum graniticum, as well as Crag martin, Grey wagtail, Griffon and Black vulture and Stonechat. The sky menaced a storm so we abandoned all hopes of a picnic. 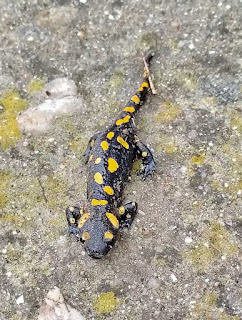 After a drink in the village of Sotoserrano we decided to eat outside under an awning at a restaurant in Miranda del Castañar, a medieval walled village. Wise choice: halfway through our meal the heavens opened but the rain fell mainly on the awning… After lunch we visited the village and from the look-out points in the walls we spotted a lively Redstart in the gardens below, as well as Booted eagle, Swift and Black redstart.
We then went to see a very special woodland made up mainly of Arbutus with Butchers’ broom Ruscus aculeatus and Sweet chestnut Castanea sativa trees. It was full of birdsong and birds: mainly invisible, but there were glimpses of Iberian magpie, Firecrest, Songthrush, Jay, Blackcap and Bluetit through the twisted trunks and dappled foliage. From here we went to the Hotel Rural Porta Coeli near San Martín del Castañar, where I had a very refreshing swim in the ice cold pool. 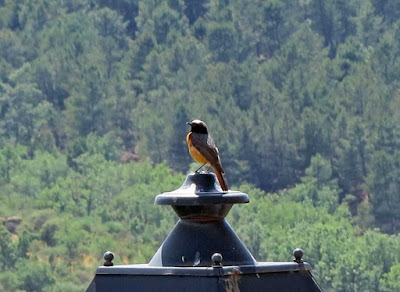 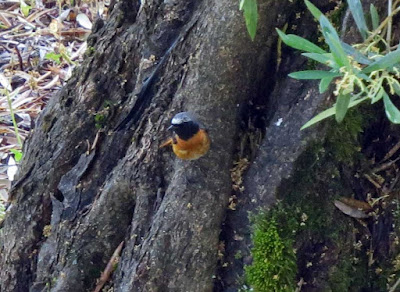 Thursday 2nd June Sierra de Francia
We began the day birding just outside the hotel, and along a track surrounded by brooms and cistus with views across the Sierra. The main background sounds were of Nightingale, Golden oriole, Great spotted woodpecker and Long-tailed tits, but we had good views of Cirl bunting, Subalpine warbler, Redstart, Red-rumped swallow (which nest under the hotel roof!), Swift, Black and Griffon vulture and a Honey buzzard which disappeared all too quickly.
We continued to inspect flowers and insects: on a cornflower was a brilliant emerald beetle known unromantically as a Thick-legged flower beetle Oedemera nobilis, on a lemon yellow Andryala integrifolia was a very hairy, as yet unidentified beetle. 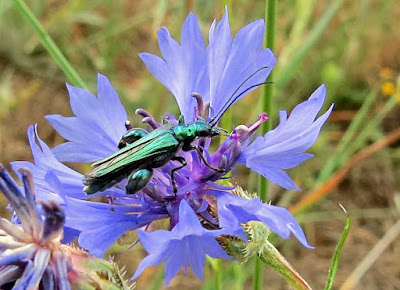 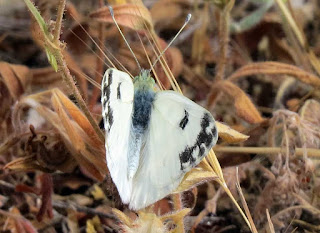 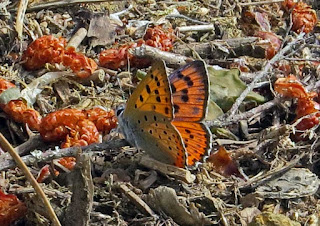 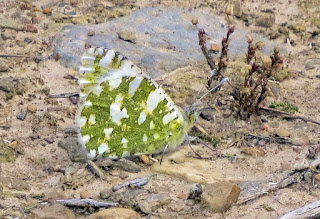 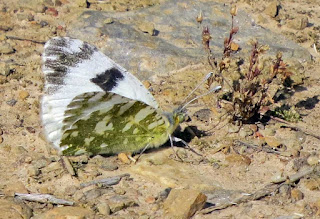 We next headed to San Martin del Castañar for a coffee and a quick look around the village and its peculiar architecture, built with a mixture of stone, mud and timber in the style of the Sierra de Francia. Lots of House martins and Swifts, common and Pallid, Crag martin, Black redstart, Cirl bunting and a Nightingale heard singing.
Some of the more important buildings have carved reliefs denoting their use, such as this daunting one from the old ‘hospital’ but not in the modern sense of the word: it meant Hostal for pilgrims.

From here we drove across to the Batuecas Natural Park, stopping off at the mountain pass to see the views and to glimpse a darting Dartford warbler flying into foliage and some vultures circling above, before we dropped 600m to the Batuecas valley (not literally!). We improvised a shady spot for our lunch in the car park, then after lunch walked along the boardwalk parallel to the river, surrounded by lush vegetation with a mix of ferns such as Deer fern Blechnum spicant and, on the river bank, Royal fern Osmunda regalis, amongst Cork oak, Arbutus, Narrow-leaved mock privet Phillyrea angustifolia, Laurustinus Viburnum tinus, St. John’s wort Hipericum and moss and lichen covered rock.
Above us Goldcrests flitted and Blackcaps called, and at our feet Alfonso spotted two lizards: Algerian sand lizard Psammodromus algirus, and an Iberian endemic Podarcis guadarramae, also a large ghekko on the edge of the boardwalk which unfortunately hid before I could photograph it. 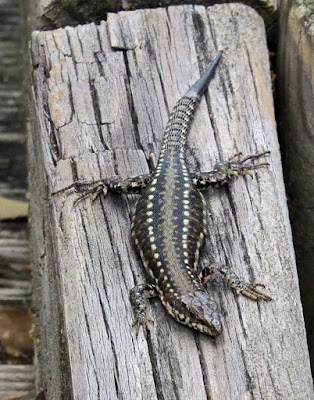 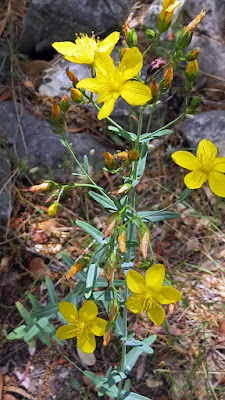 Many invertebrates to catch our eye here: Beautiful demoiselle Calopteryx virgo; a Napoleon spider Synema globosum which had ambushed a bee on some Anarrhinum bellidifolium and was about to make a meal of it; and a menacing looking rock spider which I haven’t yet identified. If you know which it is, please  tell us! 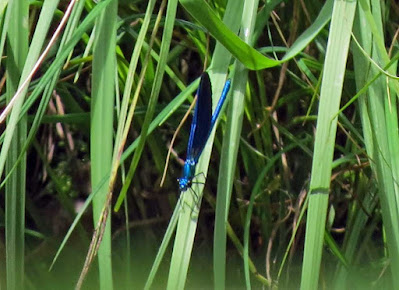 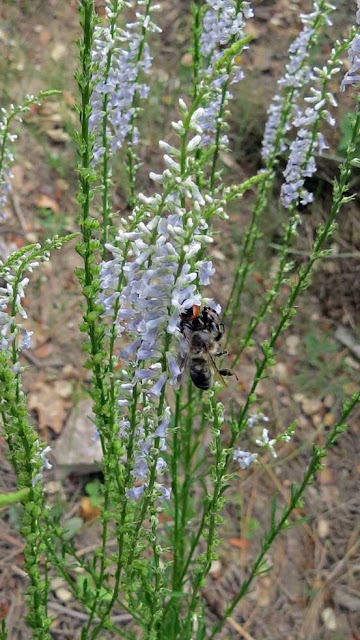 Then back up the mountain we went, to finish off the day and our mini-tour at the top of the Peña de Francia: from 600m to 1727m above sea level. It was a tad windy up there, but nevertheless we saw Blue Rockthrush, Wheatear, Crag martin, Swift, raven and Griffon vulture. Resting on some of the rocks and wisely avoiding the wind were a small herd of Spanish Ibex Capra pirenaica. I showed Edward the fossilized tracks of Trilobite in the wall of the monastery, and finally we headed back to Salvatierra, with the briefest stop at the medieval walled village of Monleon to see the granite pig and the village gate: we were all too tired for any more – maybe next time!

On the way back we saw Iberian shrike, White stork, Golden oriole, Bee-eaters, Little grebe (in a pond), and Black and Red kites. And so ended Edward and Mandy’s long awaited post-Covid mini-tour of Salamanca’s Wild West.
Thank you for coming out to us again (for the third time!!). 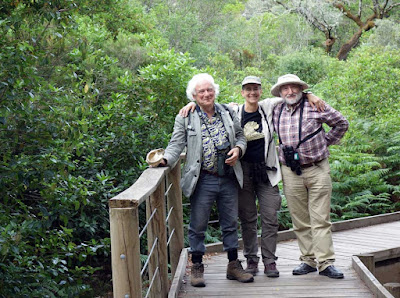 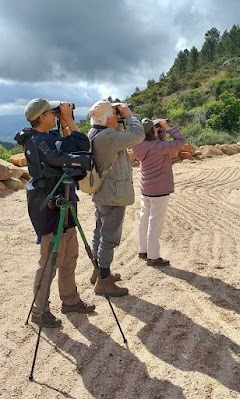 Posted by Birding in Spain's Wild West at 5:39 pm