A Lammergeier in Salamanca

This evening we went down to our vegetable plot about 1,5km from the village to check up on the beans and the tomatoes. Suddenly I saw an unfamiliar but utterly recognisable dark form loom over the hill above the plot. It was a young Lammergeier, my first since childhood passing through the Pyrenees. It took it's time and circled soaring quite low, allowing us to get a really good look: luckily we'd both of us brought our binoculars. No camera of course, though I doubt I'd have got anything I was trembling so much with emotion!
I heard that one (this same one?) was seen flying over Gredos mountain range last year, which is rare enough, but for it to be flying in our hilly area which is just 1000m above sea level with more Holm Oaks than rocks is pretty amazing.
Feel so grateful for that wonderful gift.

Last weekend we went out looking for Harriers again, as time is running out for those that are not fully fledged and risk being harvested along with the wheat and barley. 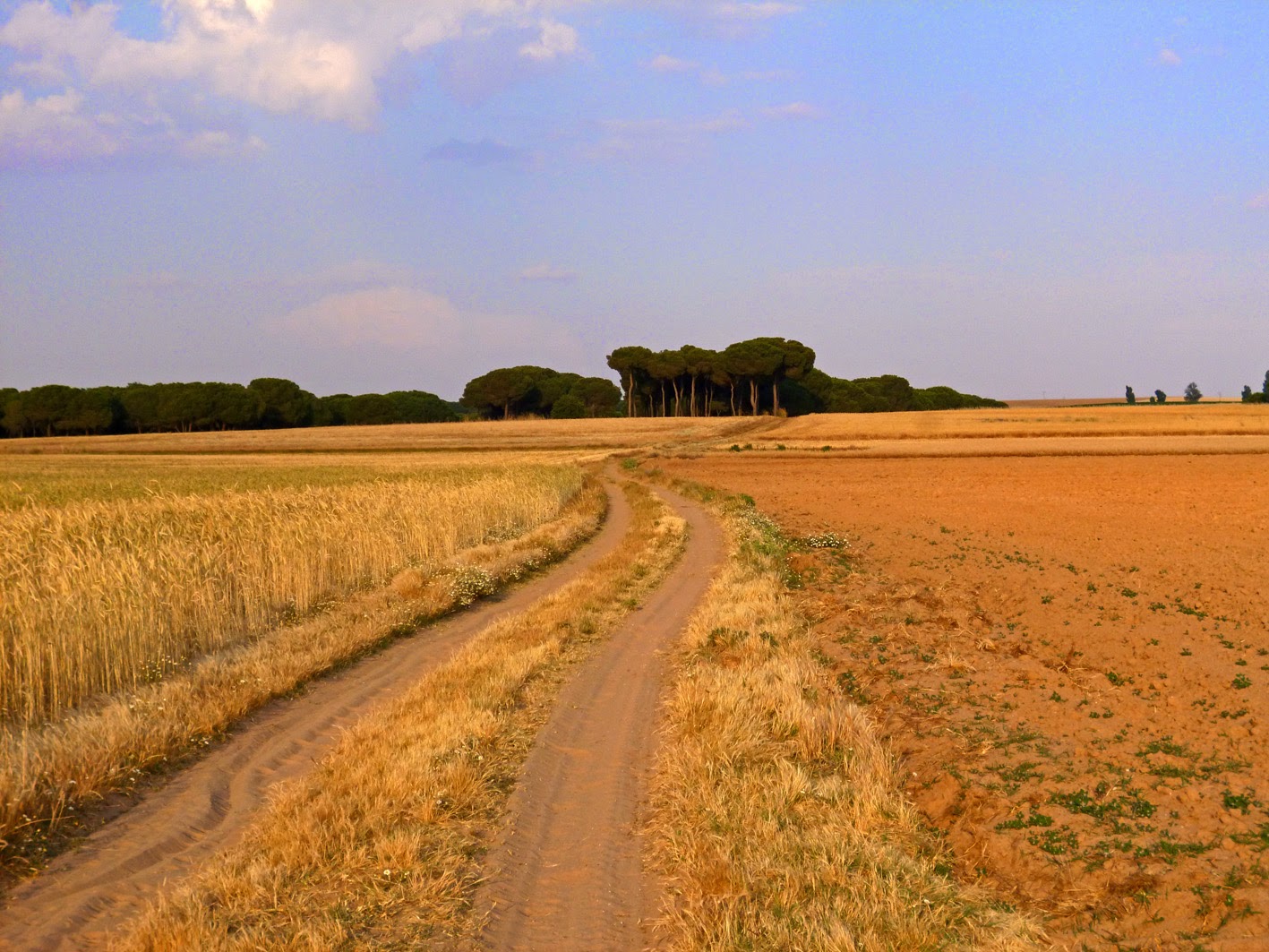 The first attempt was frustrating: we saw various couples but the female landed out of sight just above the horizon. Our companion was able to go back the following day and locate the nest and talk to the farmer.

We saw a female Great Bustard – beautiful creature – but I only managed to photograph it's prints in the sand. 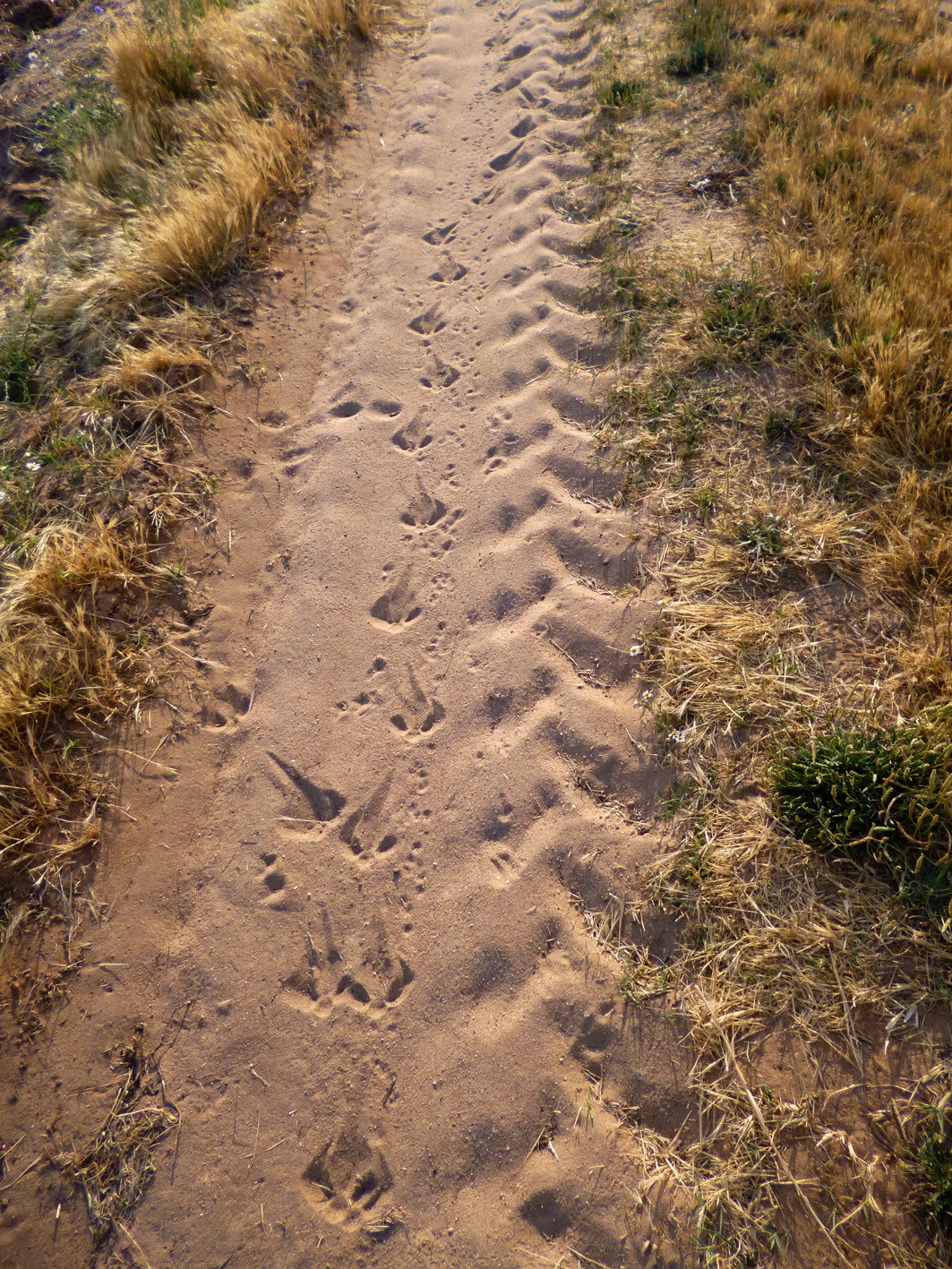 A few days later we went to where the nests had already been located and put wire mesh around the area. The farmers who have been told of this will harvest around the pen and hopefully the parents will continue to feed the chicks despite the rest of the field being suddenly exposed. 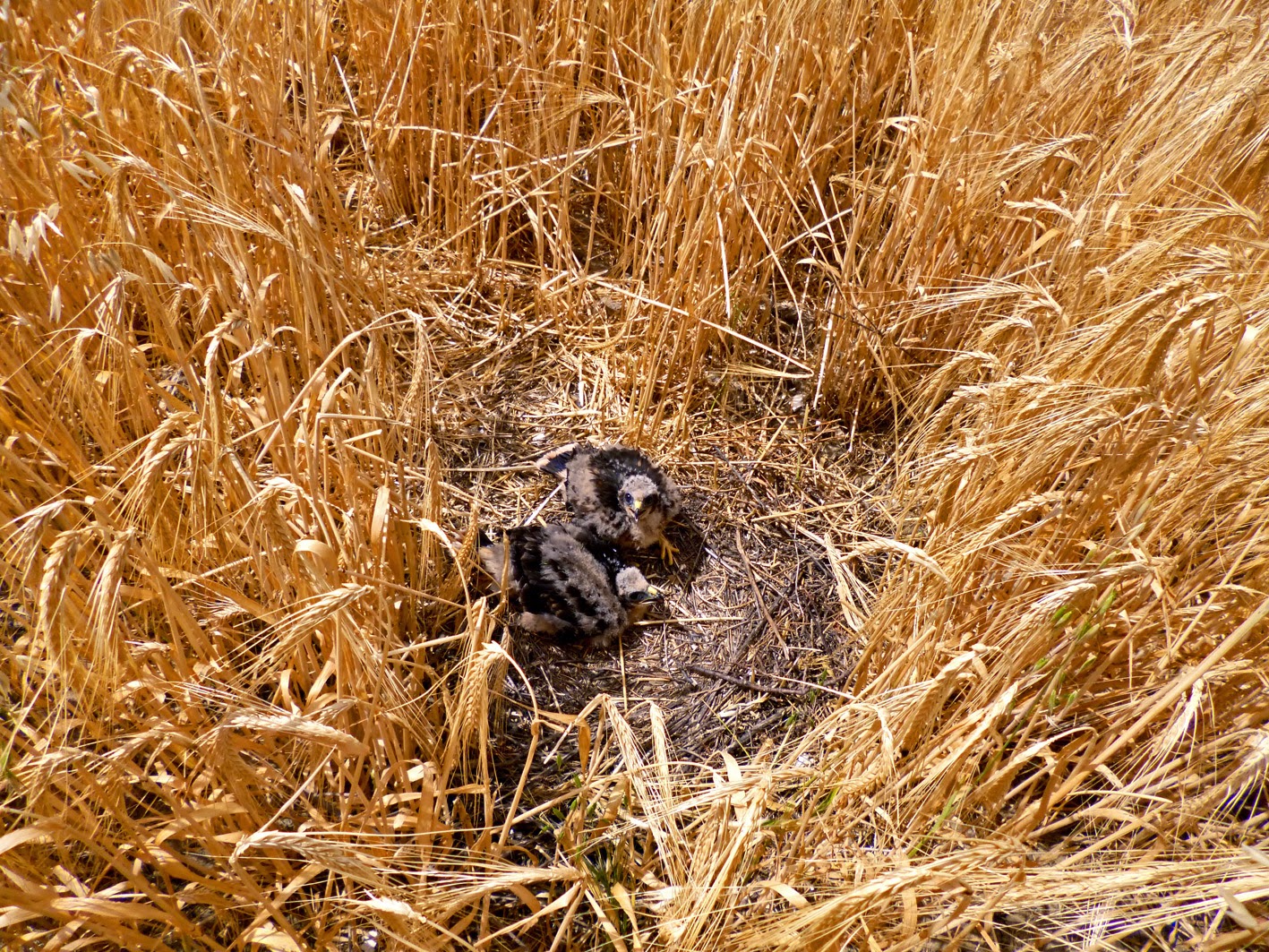 In a sea of cereal there was one lonely little strip of woodland: consisting of Cork Oak surprisingly. It was a true oasis.
Lastly I want to introduce you to the kids. Best year so far for our village storks!

Posted by Birding in Spain's Wild West at 12:04 am No comments:

Where Vultures, Harriers and Bee-eaters live

I've been busy organising a stand at the first Birdfair to be held in Madrid next week. I got together a group of seven birding guides and eleven rural hotels and cottages to share a stand under the name of Goyarcyl: acronym in Spanish for Birding Guides and Rural Accommodation Castilla y León. The crisis has been hitting everybody hard so I reckoned that joining forces might be a good way to get good publicity without crippling costs.


So if you happen to be in Madrid between the 13th and 15th June, check us out at the Madbird fair.

Had a walk the other day to see if I could spot the Black Vultures. They're local and I'm hoping they might breed in the area. I didn't see any signs of nesting but I did see thirteen Griffons and three Black Vultures roosting in some Holm Oaks.


On the way there were large gangs of juvenile Starlings, a Corn Bunting and a Thekla lark unwilling to move away.
Sunday morning I set out to try and find more Montague's and Hen Harriers.


As there's an arable area just northeast of here I decided it would be a good place to start. Sure enough, I saw a male Montague hunting just next to a wheat field. A bit further on I saw a male Hen harrier make several swoops into some yellow brooms, but he came away empty clawed.


Unfortunately I didn't see them with food, so was unable to establish if they were breeding or not. I'll have to go back soon or any nests may run the risk of disappearing: many of the fields have already been reaped, and it won't be long before the others are too. Couldn't get a photo of them, but there was an obliging Lesser Kestrel on a cable... 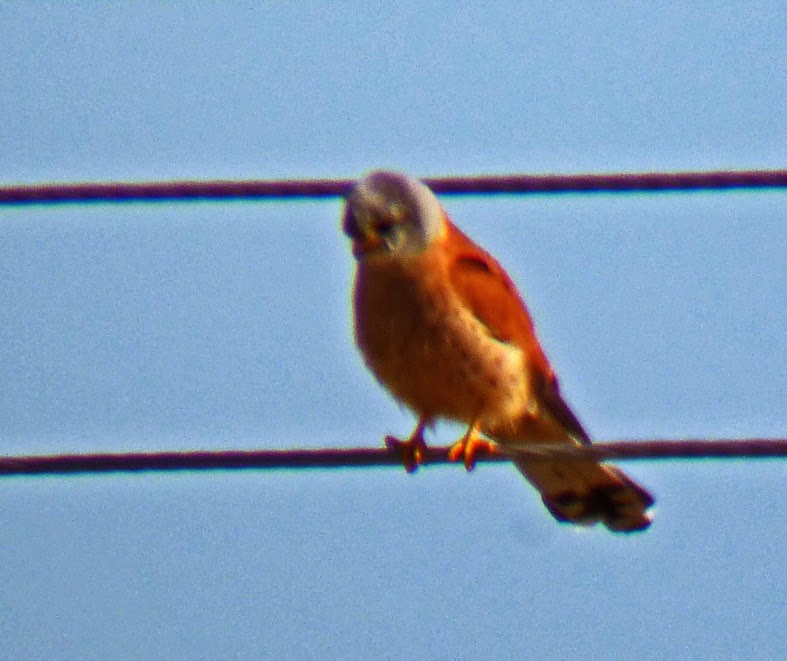 There were lots of Lesser Kestrels, Kestrels, Black and Red Kites and a Short-toed eagle made an appearance.

Lots of white storks too. 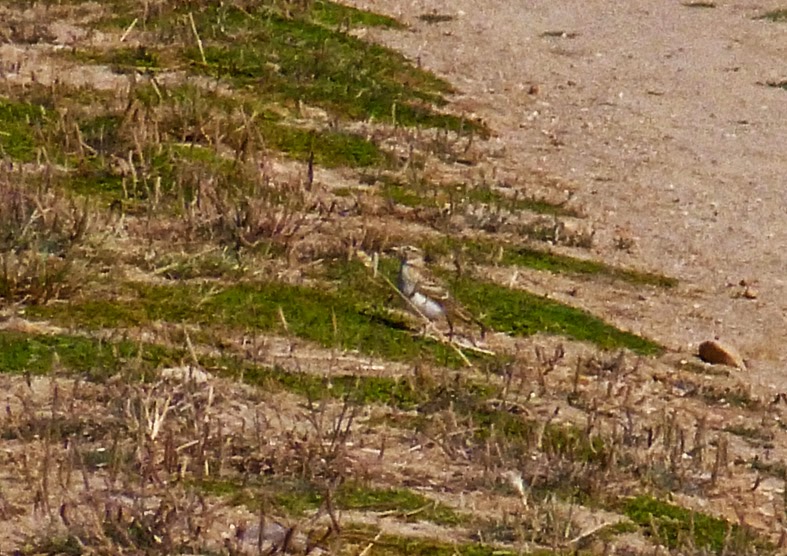 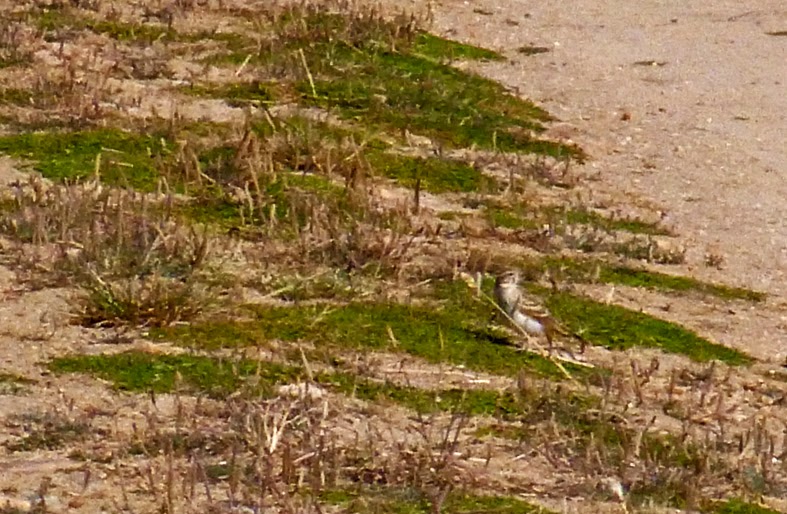 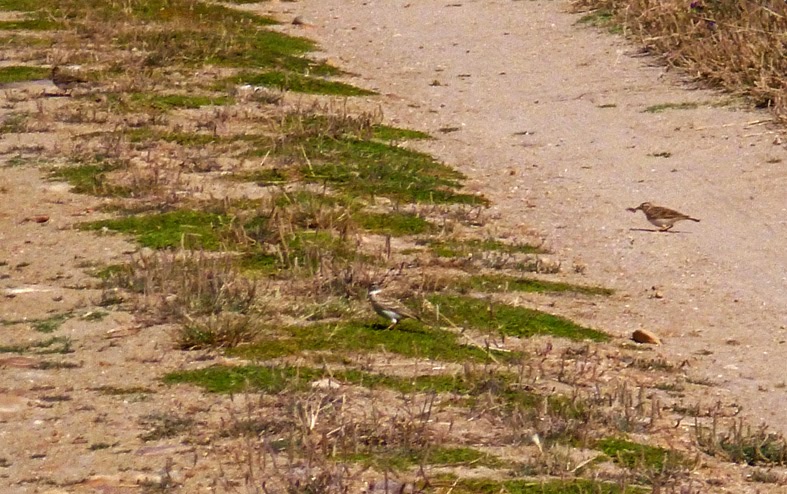 Posted by Birding in Spain's Wild West at 10:19 pm No comments: