Now in its final stage, the Harrier campaign brings both the joy of witnessing fledged birds soaring and swooping and learning to hunt or the bitter disappointment of discovering that, after all the efforts made to protect them, they nevertheless succumbed to the laws of nature.

A farmer contacted the local group to say that he had found a nest whilst harvesting, so we went out to put some mesh around the area in order to protect the chicks from terrestrial predators like foxes or dogs. As we approached the mother Montagu Harrier rose up revealing her secret nest. 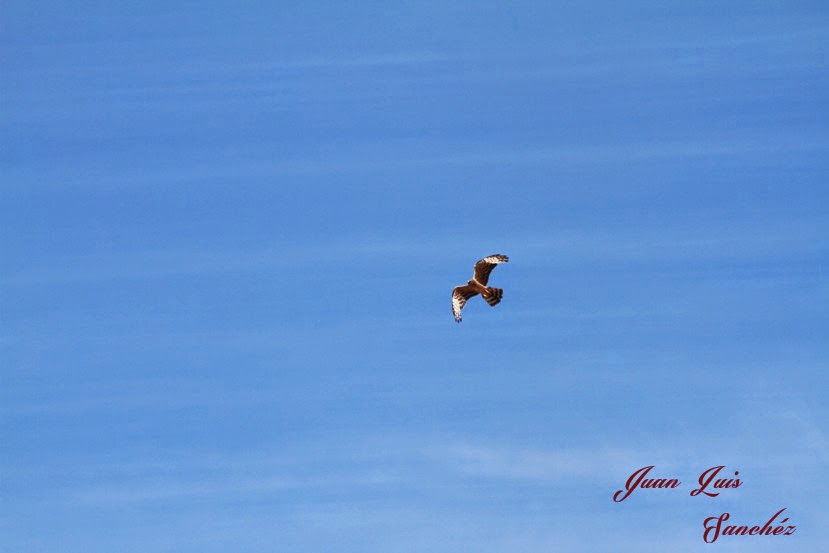 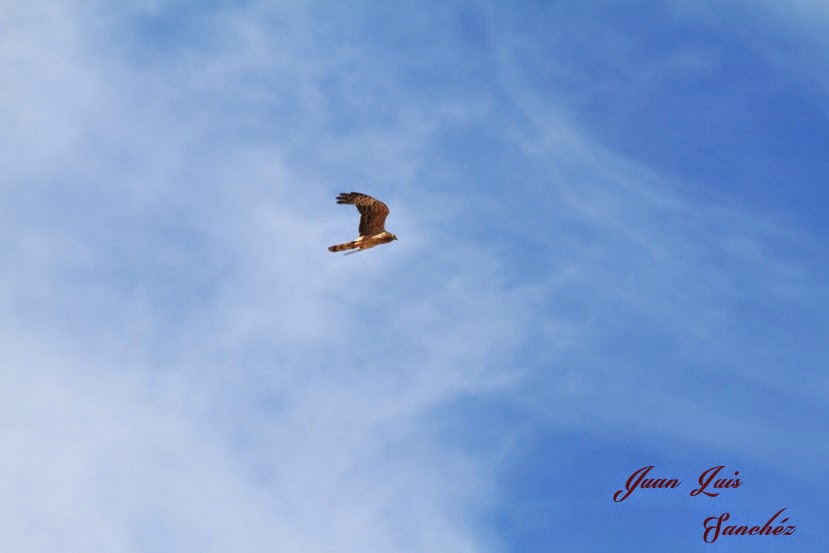 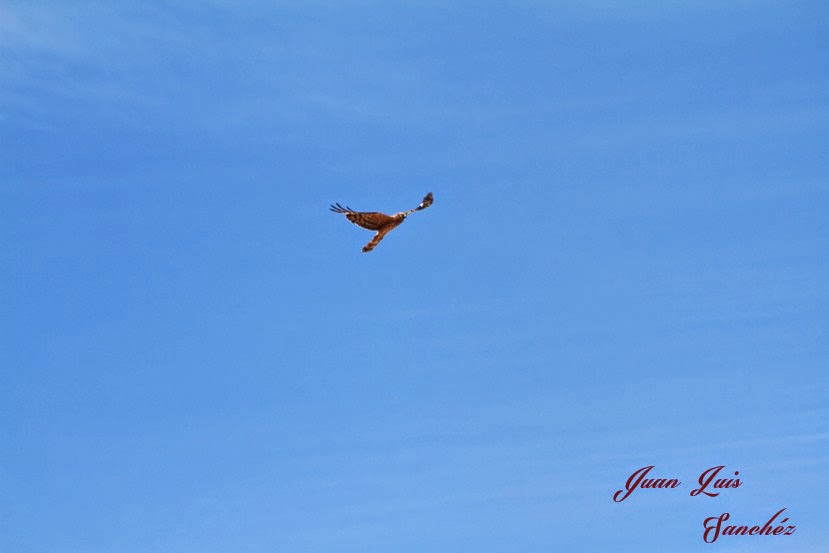 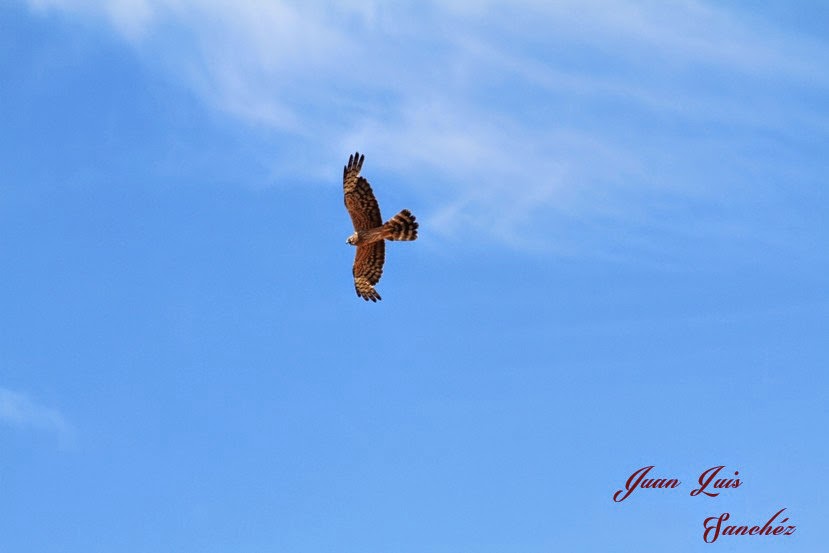 This is what we found. Three recently hatched chicks. 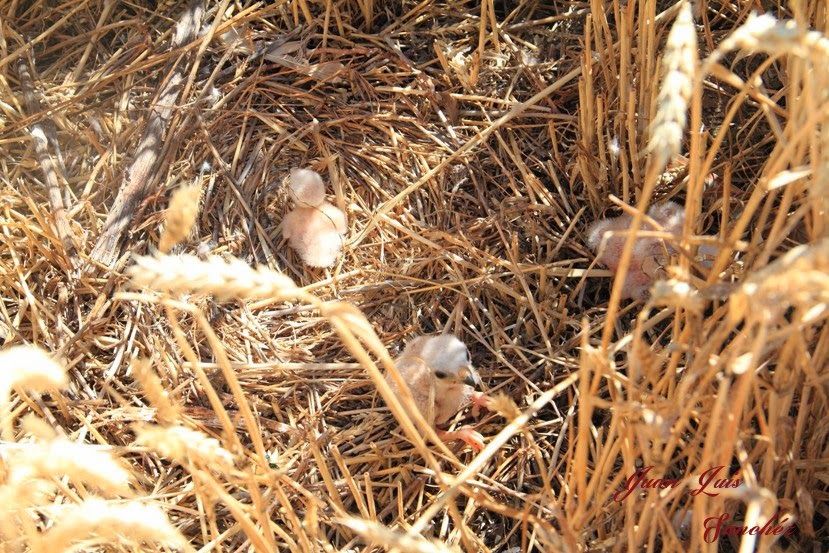 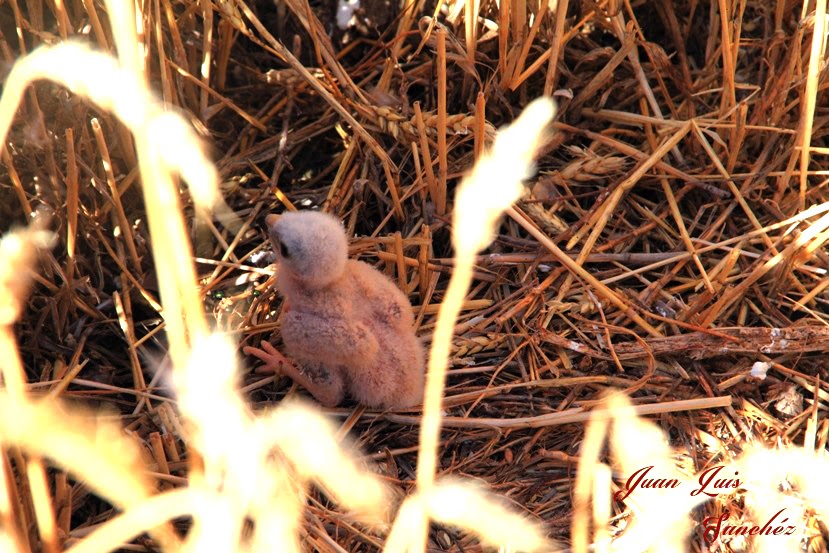 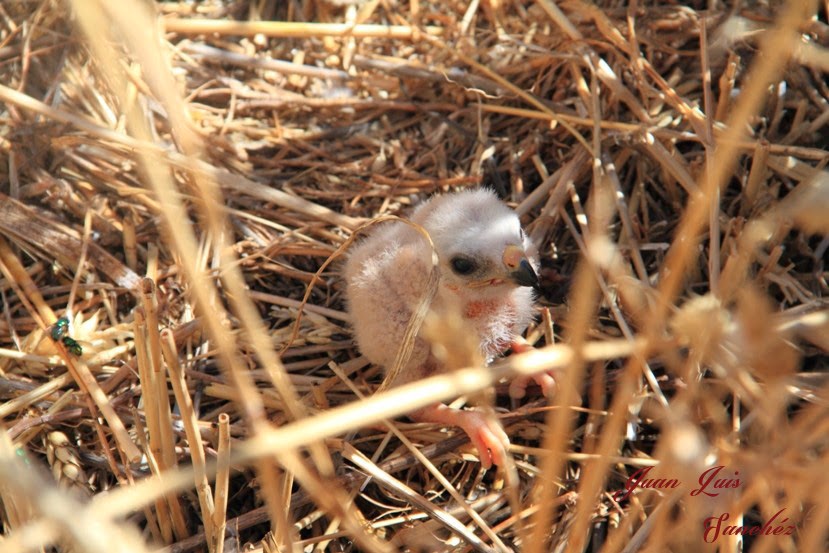 We then went to check on another nest: this time all but one of the chicks had fledged, the last being days away from flying. Its sibling flew away as our colleague approached but it settled on a haystack and stayed there until we had left. They are still dependent on their parents for food so will return to the nest for safety.

Thanks to José Luis Sánchez for the photographs. 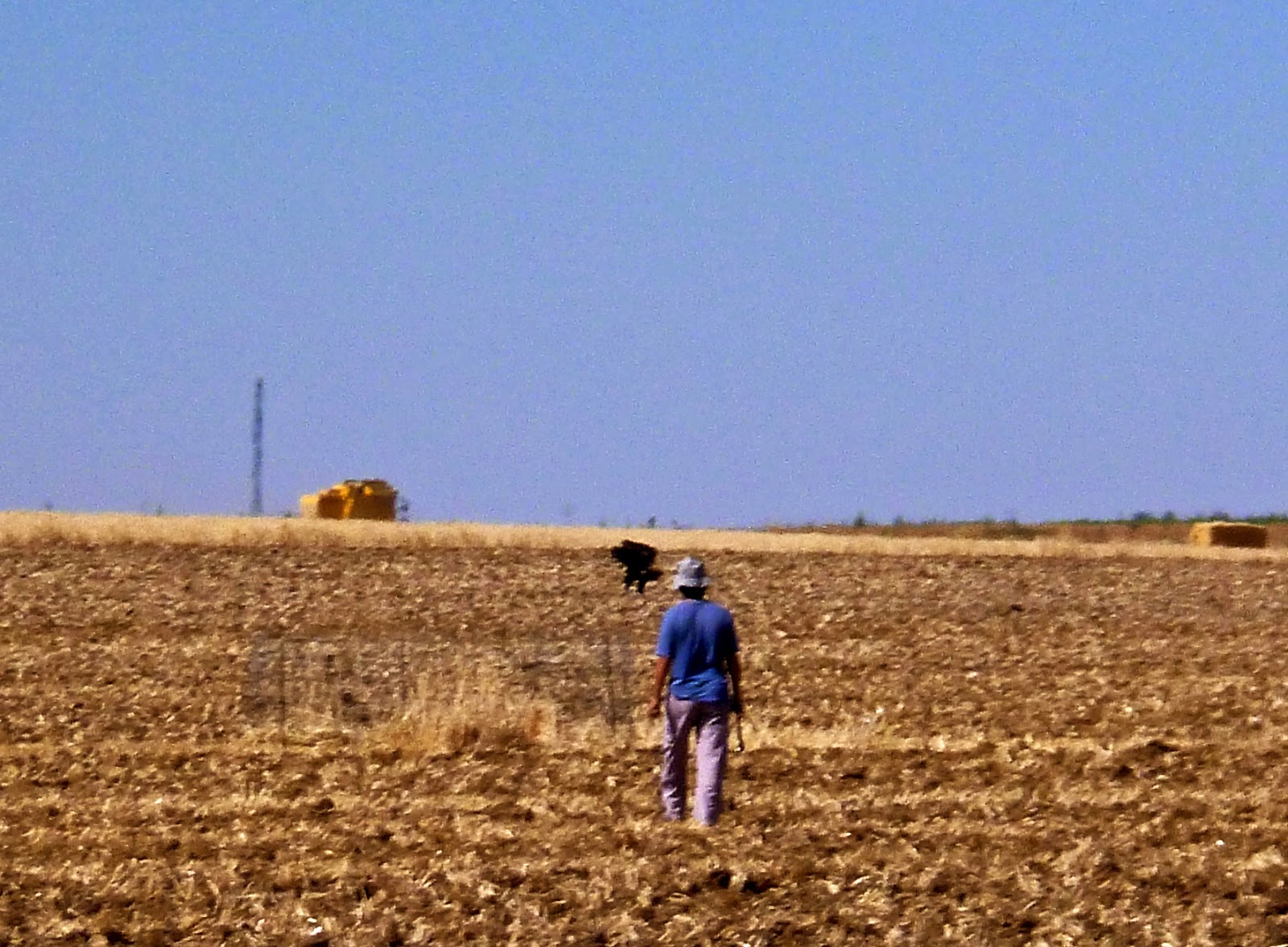 The third nest we checked on was suspiciously void of movement, as the chicks should by now have fledged. When we got there we looked in on a scene of avian carnage. Despite the protective barrier a large raptor, possibly the Booted, Golden or Imperial Eagle had been there before us and all that was left were the remains of wings, heads, and a little further off more feathers. Such is life, and we hope they may have served to feed the chicks of one of the eagles.

As we drove through the cereal steppes we couldn't help noticing the red plastic tubes scattered around on the edges of the fields. These containers are the unpleasant reminders of the Castilla y León governments 'solution' to plagues of Vole Microtus arvalis : poisoned grain was held within them, containing the extremely toxic rodenticides chlorophacinone and bromadiolone. As voles actually prefer to graze on fresh shoots, and their cyclical population explosions lead to a natural mass die-out, the result of this government folly was a massive poisoning of most of the mammal and avian species in the area, either by ingesting the lethal grain or through ingesting poisoned animals. Thus thousand of mammals and birds including endangered species were lost through stupid decisions by ignorant politicians who should have known better.

This year when (unjustified) alarms were raised that we should expect another plague and the autonomous government purchased 86 tons of poisoned grain, an allegiance was formed between the SEO (Spanish Ornithological Society), Ecologists in Action, the hunters association and various scientific bodies and NGOs and they managed to dissuade the authorities from repeating their insanity. There are very effective natural ways of controlling plagues, which involve placing nest boxes to encourage various predators such as Kestrel, Short-eared owl and Barn owl.

On a more positive note our wren family is doing well and the Booted Eagle chicks are due to fly any day now. They stand up on their mighty legs and flap their wings and show all their raptor potencial. 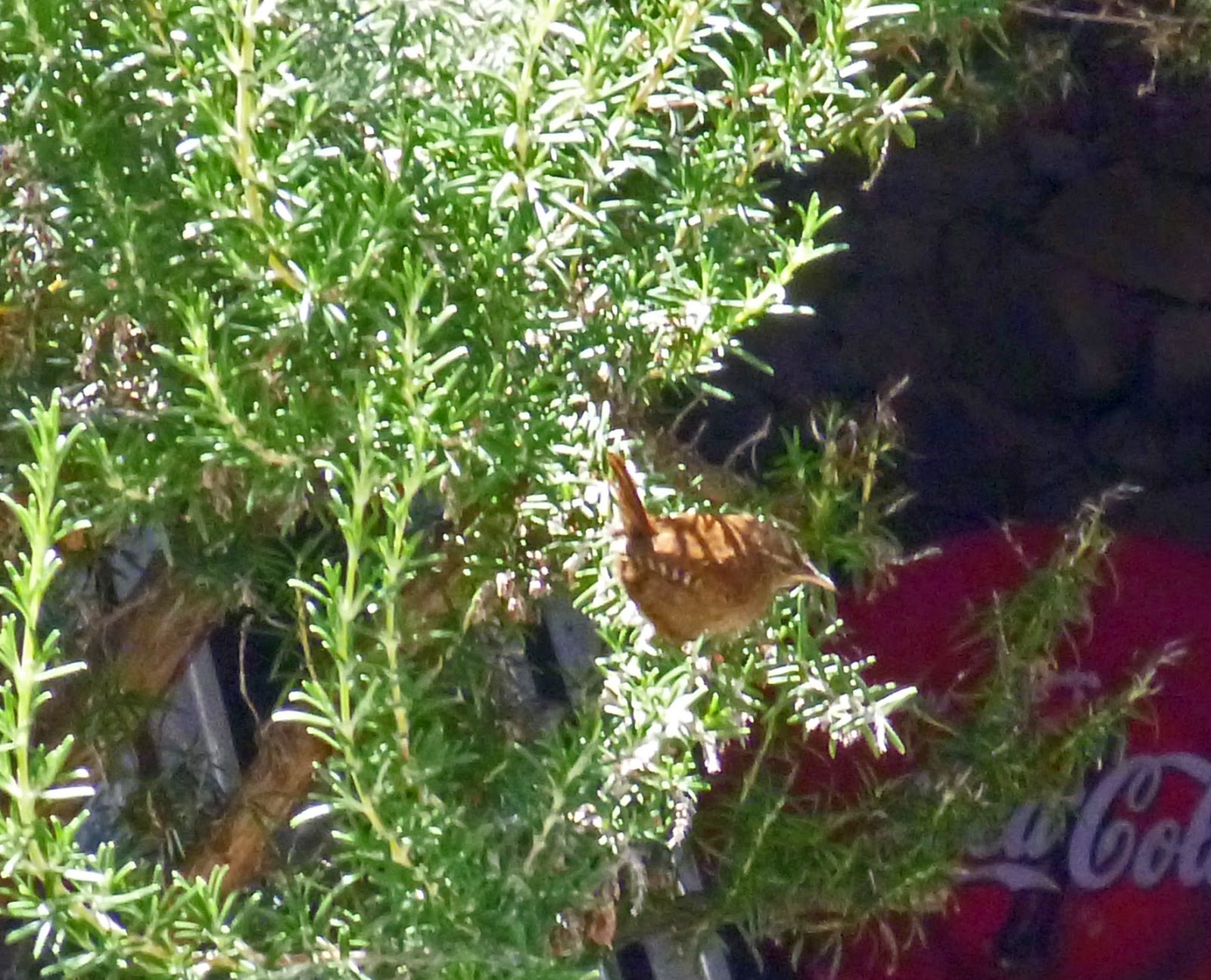 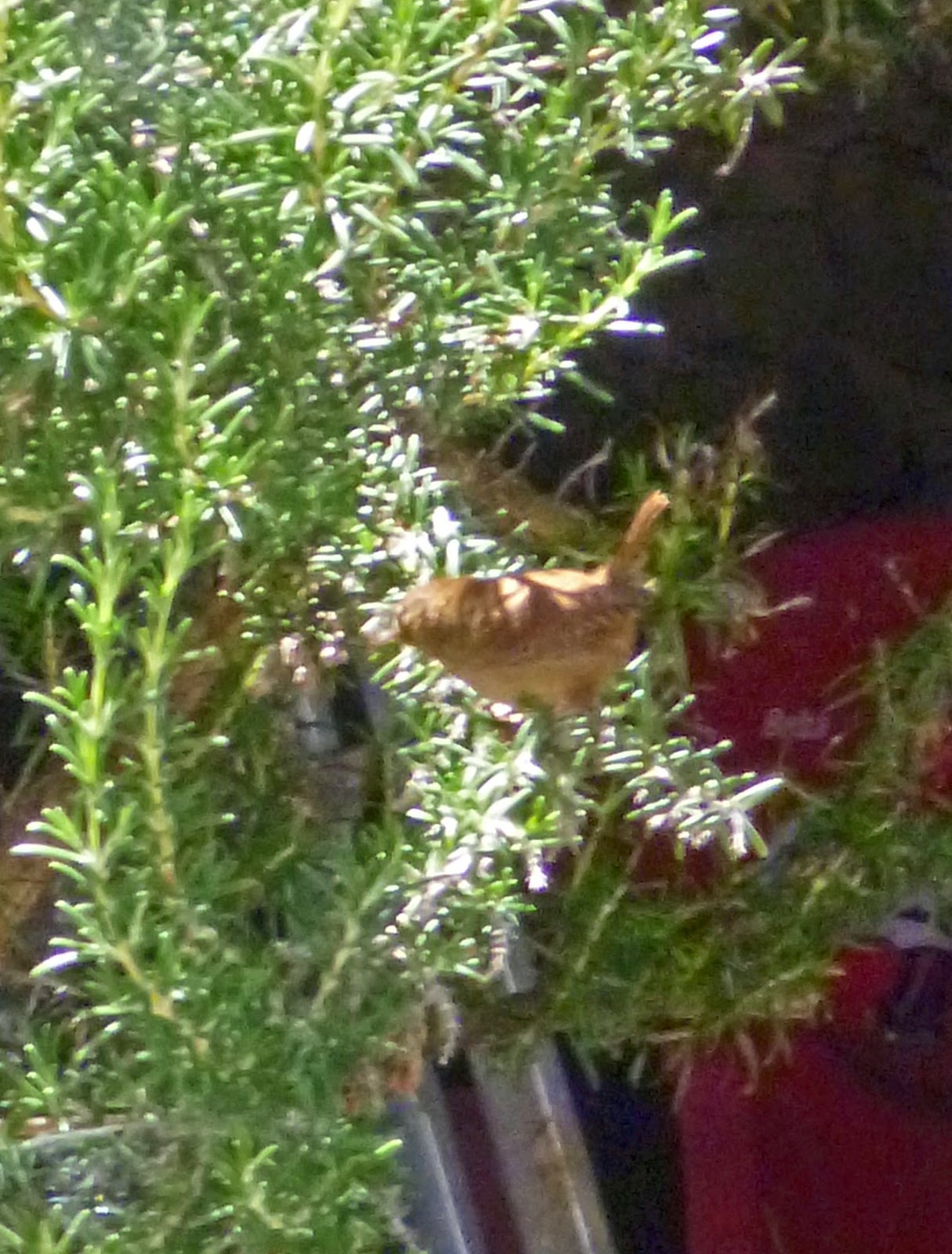 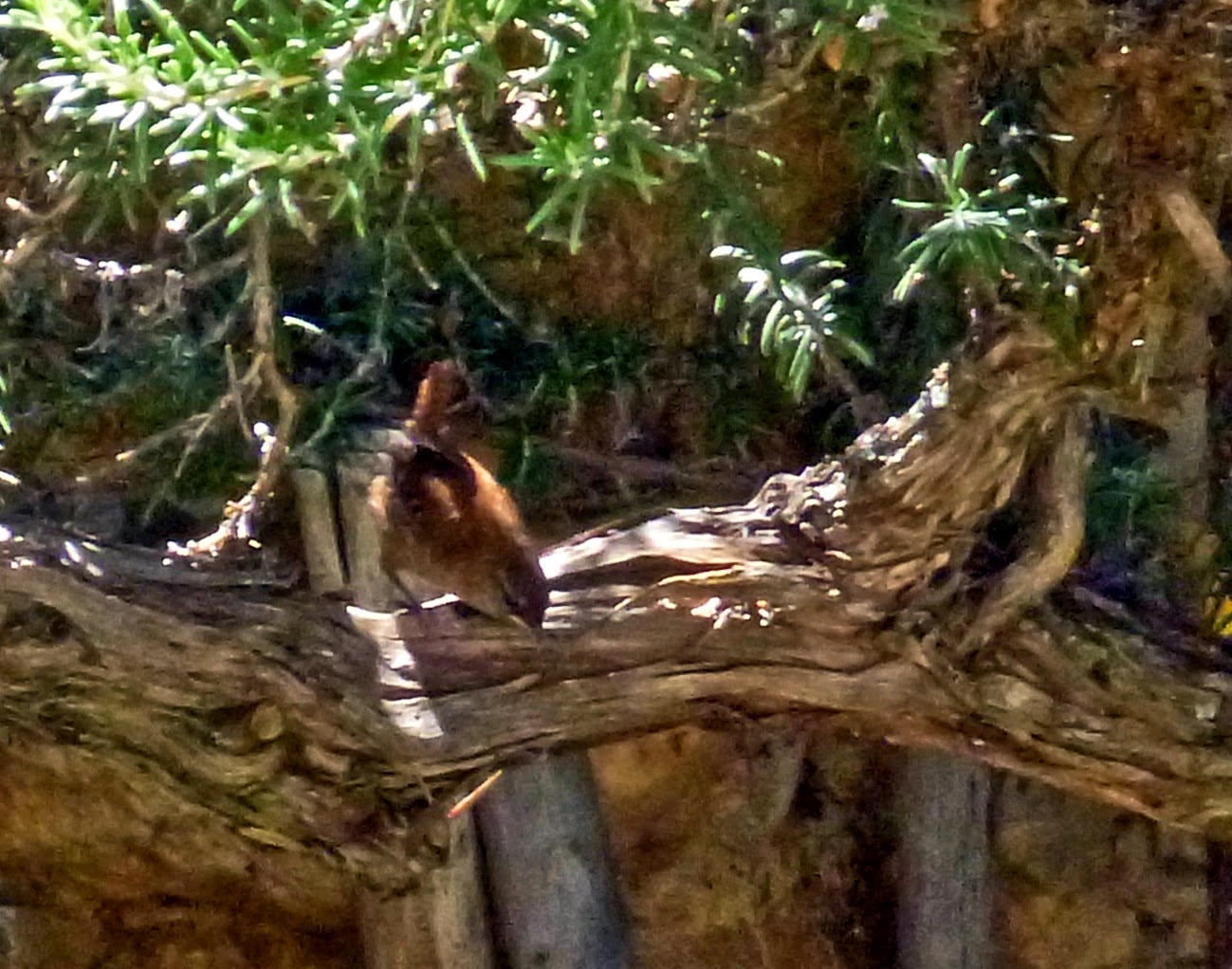 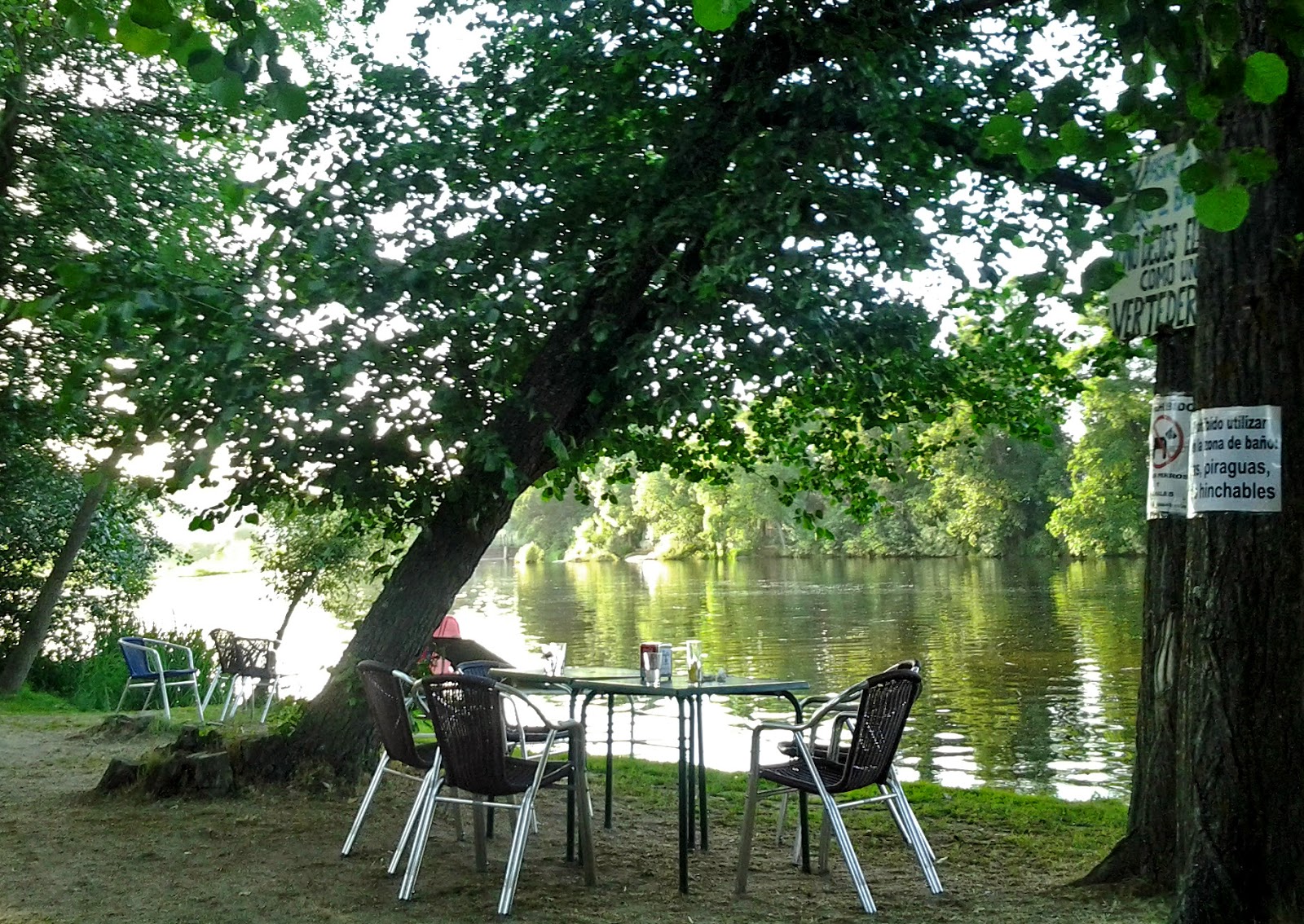 Posted by Birding in Spain's Wild West at 1:02 pm No comments:

A Stormy Start to July

July began with thunderstorms and torrential rains. We had rivers running through the streets of the village, bringing stones and sand and earth from the 'caminos' above. We spent three hours baling water out of the front hallway: it poured through a hole in the adobe and stone wall made by a family of crickets, who like to move in in winter.

The rain has meant a reprieve for many of the Harrier chicks that haven't been found and protected, as it stalled the harvesting for another few days giving them time to learn to fly and leave the nest. As long as they can get out of the way of the machines they'll be safe and their parents will still be able to feed them until they can hunt for themselves.

And our Stork chicks are now flying and the rain means they'll be able to gorge on plenty of insects and amphibians before their long trip back to Africa at the end of the month. 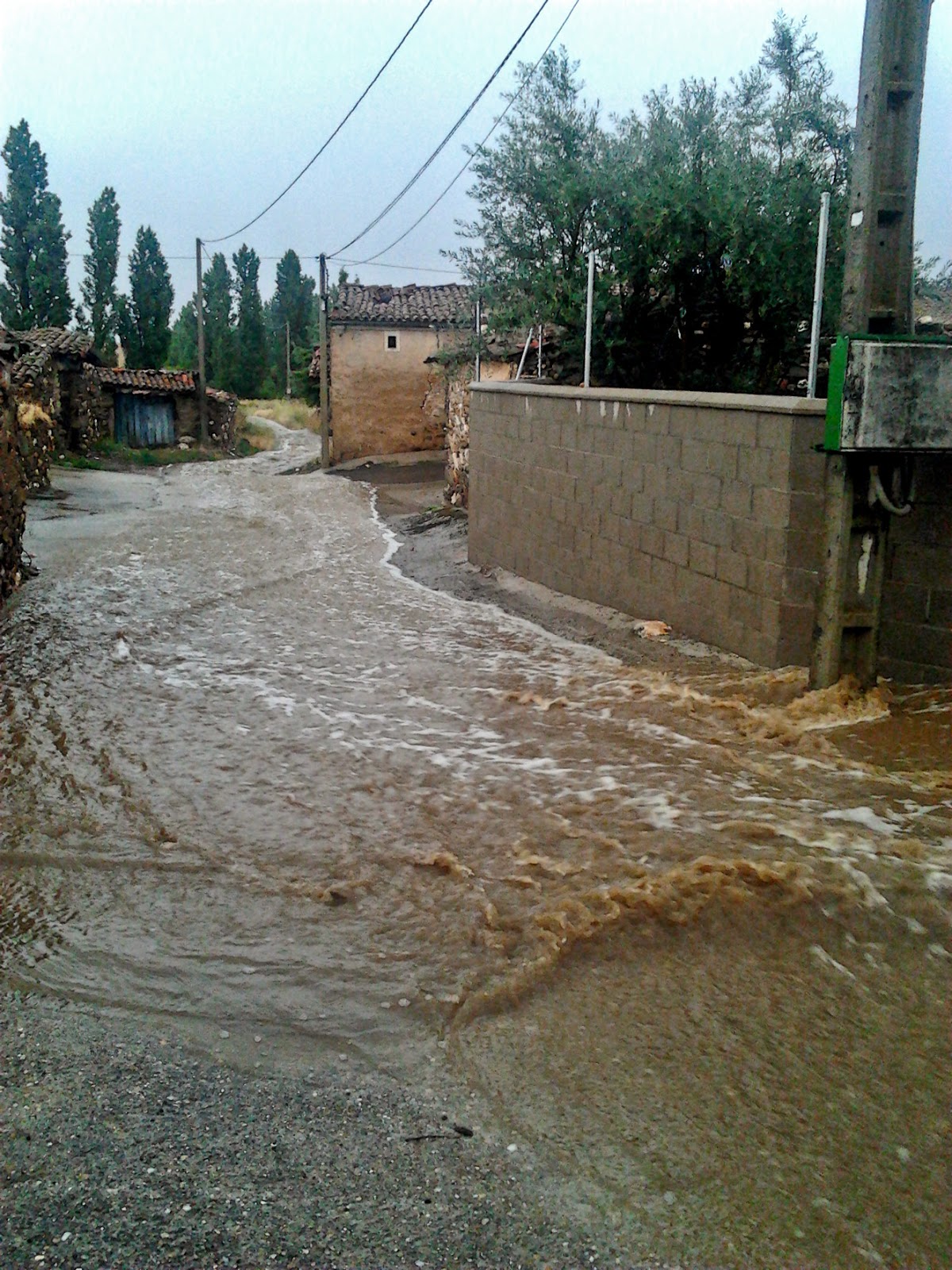 We wondered if the Short-toed or Booted eagles were nesting close by here, as we often see them in the area, so we went for a walk up over the hill and down into a wooded valley of Holm oaks. Sure enough, at a distance of about 1 kilometre we spotted something white in a tree: it was a booted eagle chick, though we had to wait for a while before we spotted the parent eagle and could identify it.
After the storms and as soon as the sun came out again we went back to see how it was progressing. This time we saw two chicks, now no longer white and stretching out their little wings, no doubt eager to use them soon. We keep at a safe distance and watch from the other side of the valley, under the shade of a Holm Oak, but nevertheless the parent eagle is perfectly aware of our presence, always vigilant it appeared rapidly as soon as a Black Vulture came within range: it soon saw it off and almost knocked it out of the sky! We were surprised because the vulture is hardly a threat, but obviously the eagle was taking no chances.
Last Sunday we celebrated Alfonso's birthday with an excursion to the Sierra de Gata, the mountain range dividing southwest Salamanca from Extremadura and reaching across to Portugal. We skirted south around the Sierra de Francia crossing the river Alagón, where we spotted a Spanish Sparrow nest hanging from the side of the bridge. 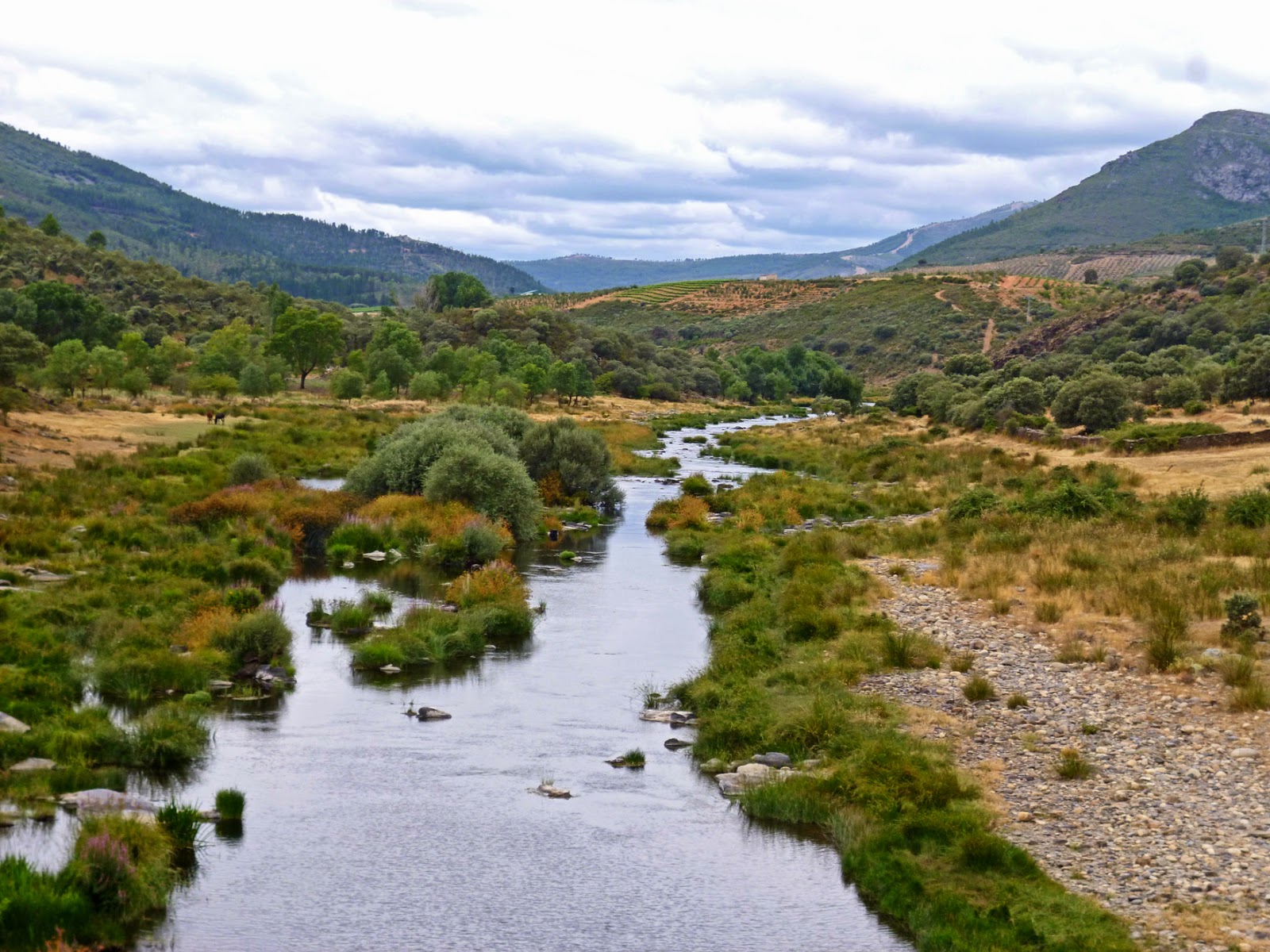 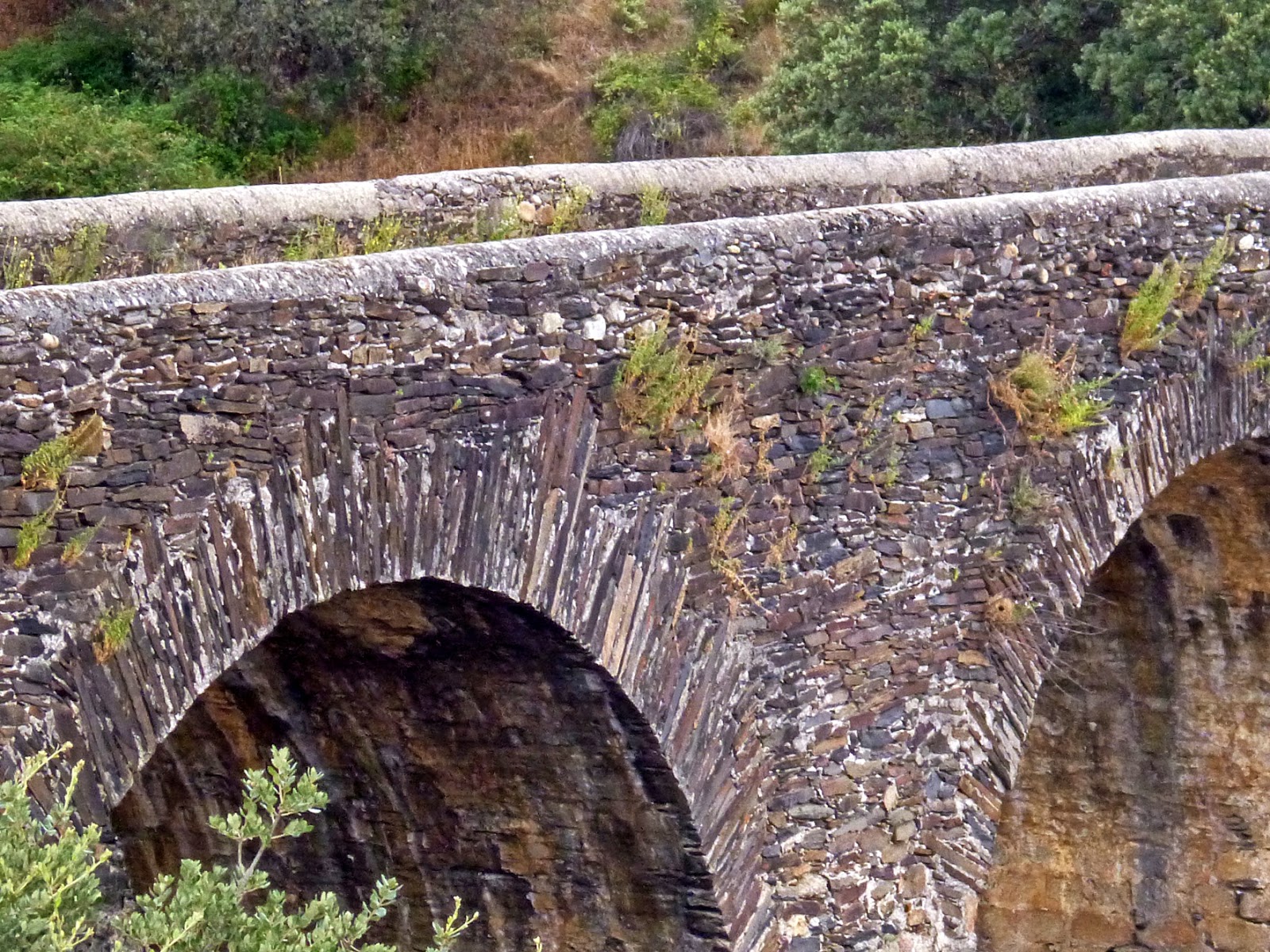 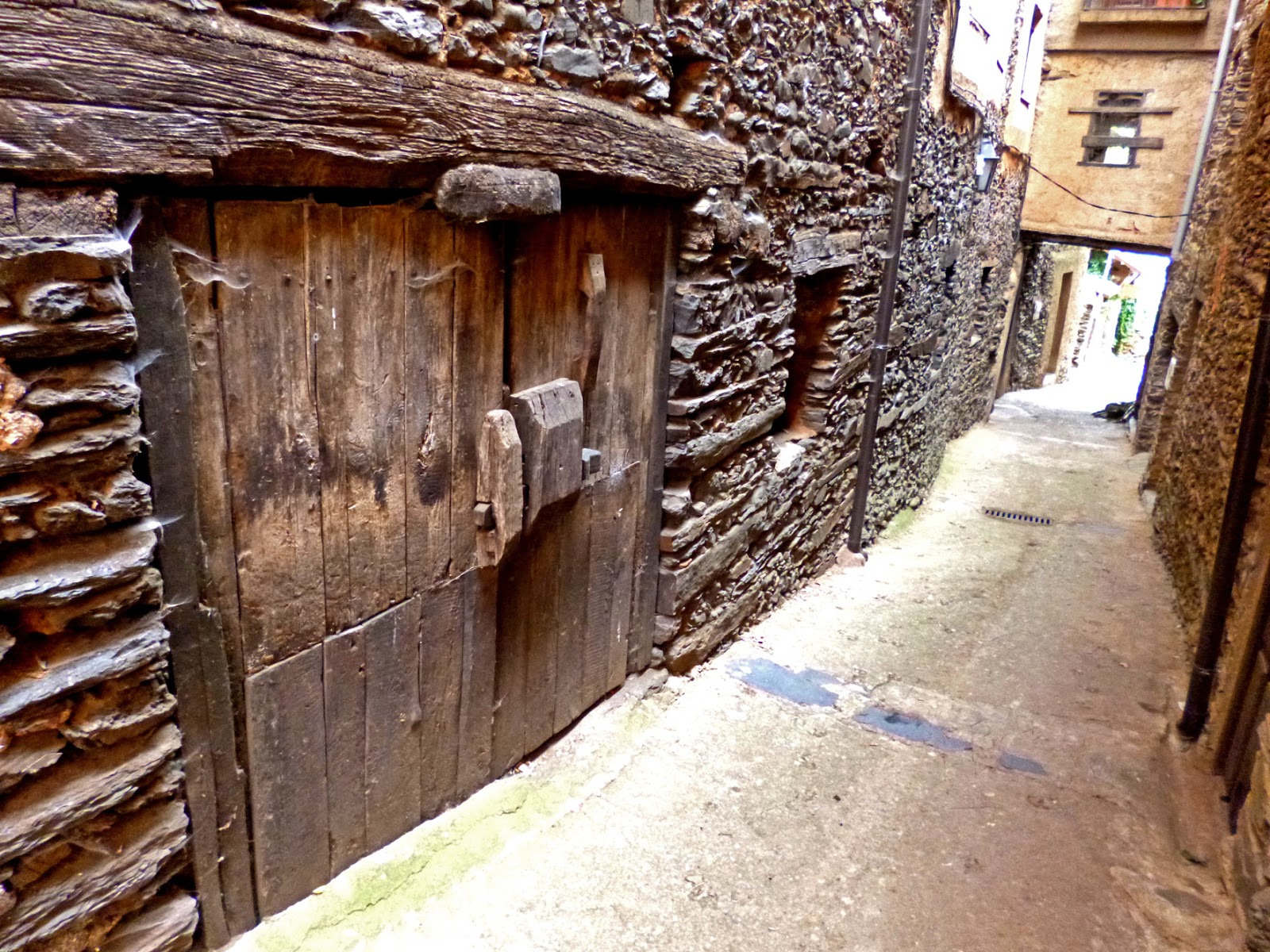 It was cloudy and rained on the Extremadura side, but we drove through forests of Pine, Cork Oak, Broom and Tree Heather, and crossed back over into Salamanca where we stopped by the River Águeda to see the canyon. Perched on a rock overlooking the valley was the Golden Eagle. Majestic. 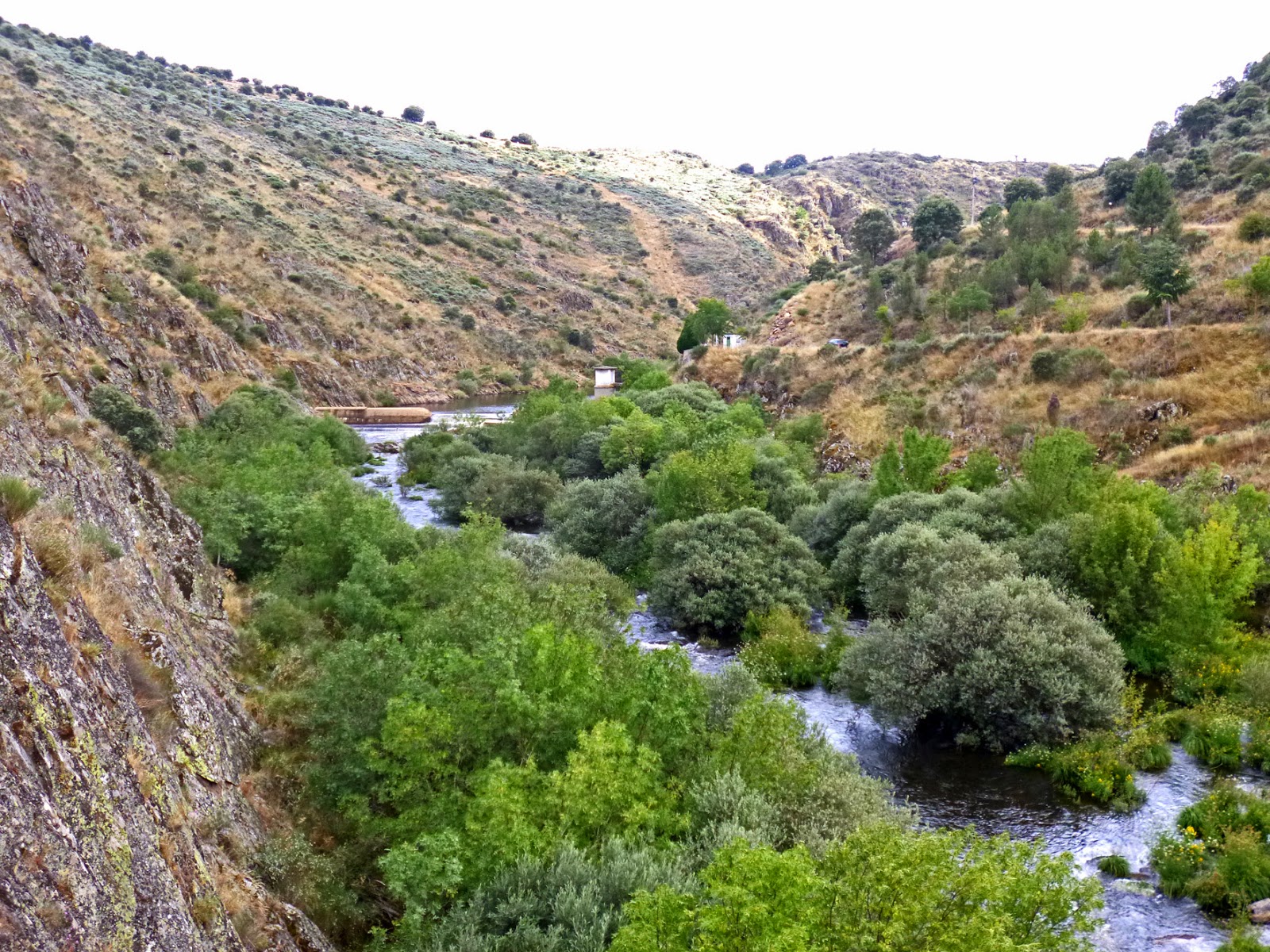 Below from the bridge we saw it again, and down in the valley below we watched a Dipper fly upstream, and Crag Martins flying constantly to and fro from their nests in the crevices.


Finally on our way home we stopped at the Laguna grande. Here we saw hundreds of Great Crested Grebes with chicks, some of them hitching a ride on mum's back... 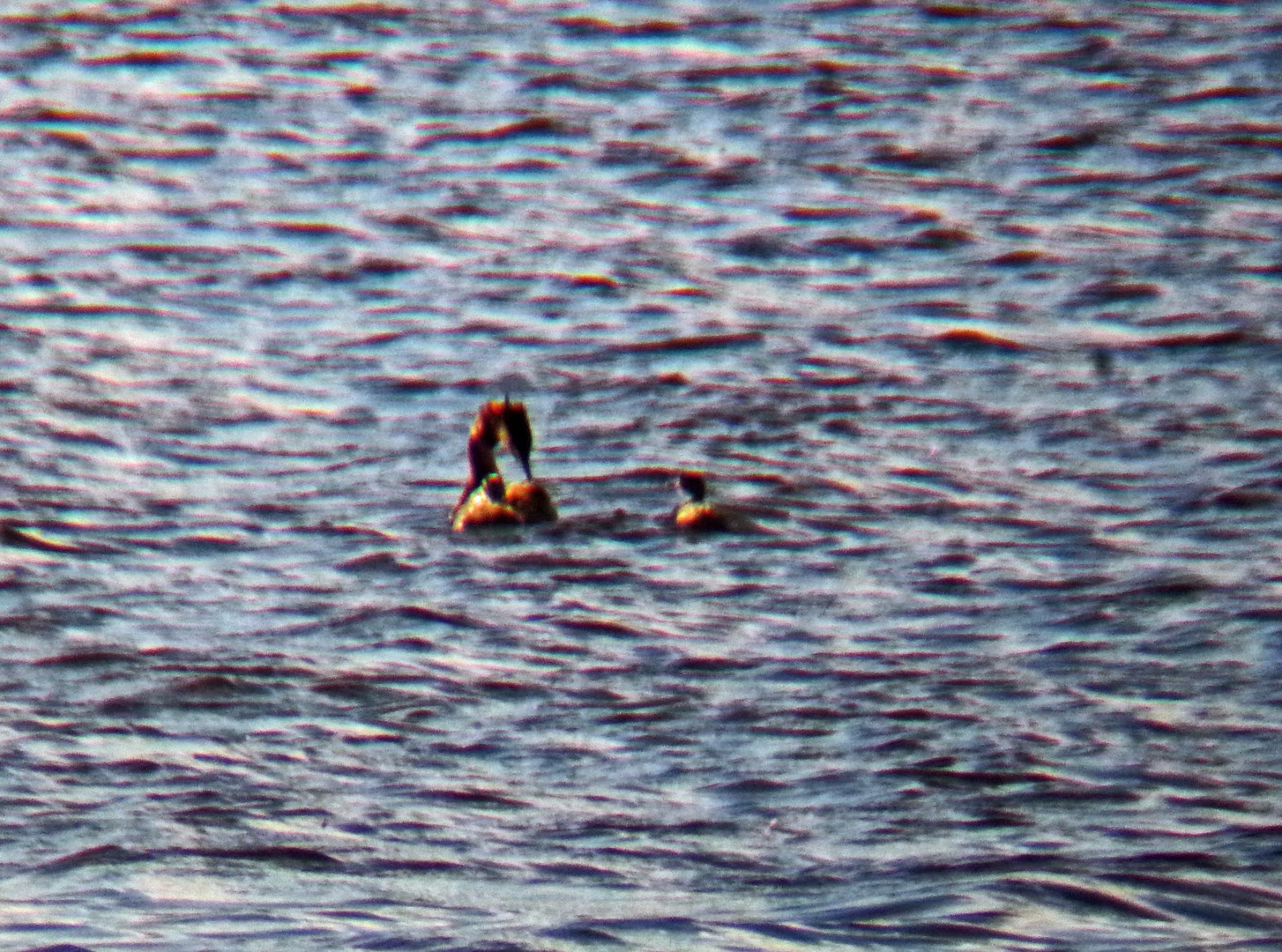 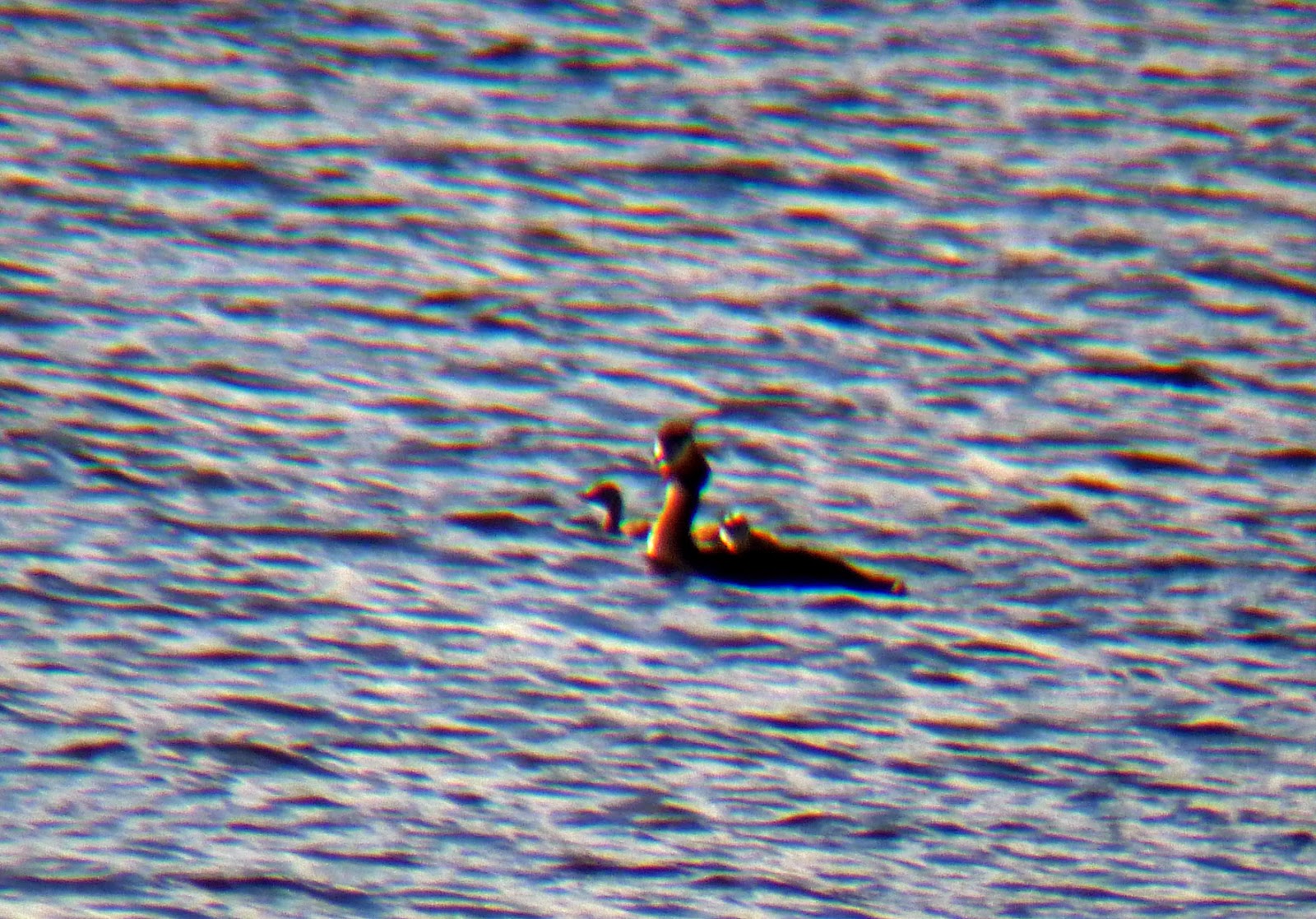 Posted by Birding in Spain's Wild West at 10:03 pm No comments: