Over the last week we've been busy checking out new routes and participating in a national survey of Red Kite for the Spanish Ornithological Society SEO.

We had a walk through the Sierra De Tonda and the first 40 minutes we began to wonder what had happened: not a bird in site, not even a twitter could be heard. As we topped the hill we started to hear and see Blue Tits, GreatTits and Log-tailed Tits, and the Short-toed Treecreeper entertained us as it worked its way up various oaks. Then suddenly we saw a Hawfinch perched on a dead tree - it stayed long enough for us to get a good look but unfortunately not to get a good photograph. We don't see too many of those around here so it's always a nice surprise. 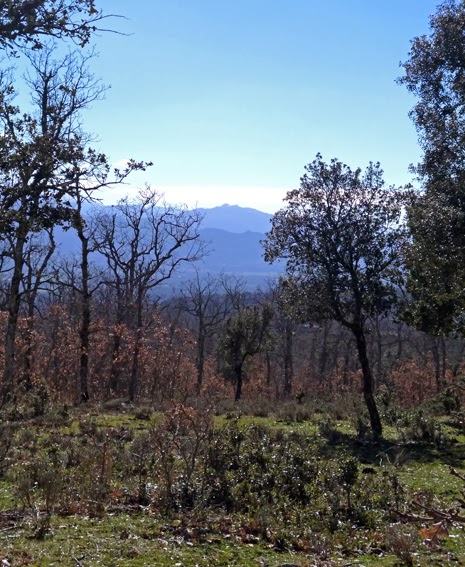 On Friday we got up early to do a count of Red Kite in a roost we'd identified in the area. At home it was a crisp winter morning. As we got to the trees in question we were enveloped by thick fog. Couldn't see a thing!
On Sunday evening we went out with a group in Salvatierra to watch the cranes arriving at the Santa Teresa reservoir for the night. There's a perfect viewing platform under the ruins of the castle where you can set up telescopes or just watch with binoculars. We also took the group around the village to see the great variety of finches which are attracted to village life in winter: groups of Greenfinch, Goldfinch, Serin, Chaffinch and Linnet. The inevitable Black Redstarts bobbed up and down right on cue and the Stonechat delighted all by returning over and over to it's post. As we wandered a little out amongst fields we saw a group of Rock Sparrow on some electrical wire: their stripey heads showed well but you had to guess at the little yellow square below their chins. Suddenly we were rewarded by several cranes flying right above us, which was a reminder to us to head back to the reservoir and focus the scope on the shores as they started to come in. We stayed long enough for a lovely sunset but the falling temperature obliged us to return to the hotel for a cup of hot chocolate and some local cakes.... 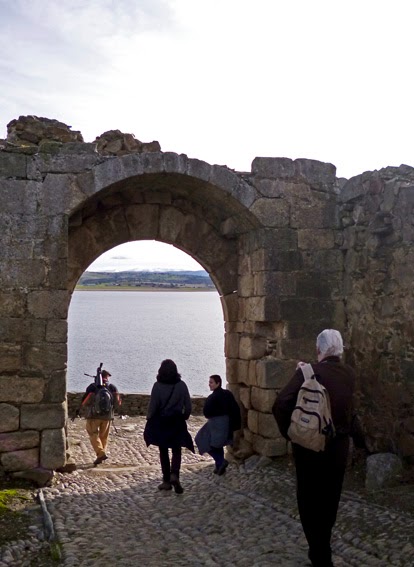 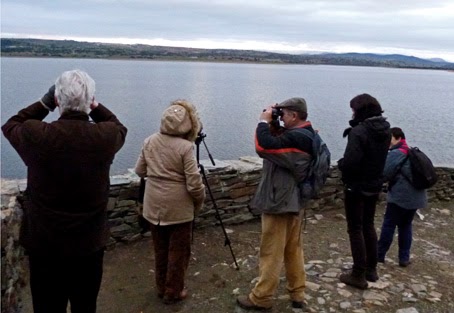 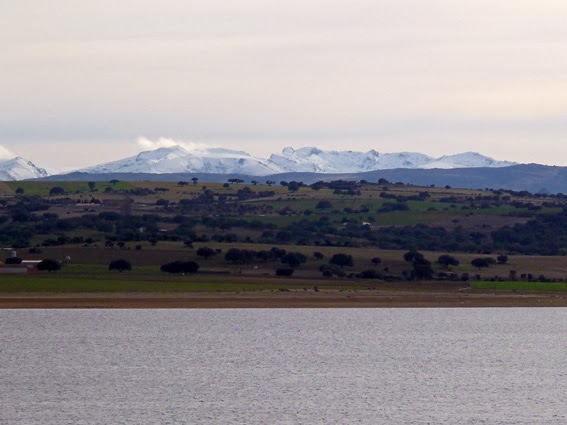 On Monday we went back to the Red Kite roost and watched 30 arrive and settle for the night. For a while they were joined by a pair of Black Vulture who circled overhead with the Kites before veering off no doubt to their own roost. Seeing them there makes me hopeful that they might be preparing to nest in the area. Will have to keep a close watch... 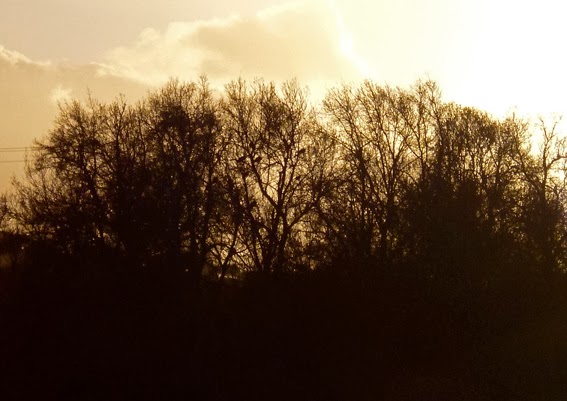 Posted by Birding in Spain's Wild West at 6:20 pm No comments:

This last week I’ve been thrilled to see a Dartford Warbler in our patch of land: it flew from one wild rosebush to a small wooded area and then I lost it. Later as I was watching a pair of Stonechat it reappeared by their side as if to reassure me that I hadn’t imagined seeing it.  I have a soft spot for this little bird, so it made my day.  I also saw a Cirl Bunting just by the village so I’m hoping that they’ll be nesting again very soon…

Yesterday we had an outing to the Lagoons of Villafáfila in Zamora.
It’s a bit of a drive but worth it at this time of year for the amazing amounts of wintering geese, ducks and waders, but the stars of the day just had to be the resident Great Bustards.
It was cold and windy and my eyes watered as I tried to focus but I managed a couple of half-decent shots.
We were really pleased to come across a couple of Avocets feeding in a small lagoon, and they stayed long enough for me to do some digiscoping, and flew off just after I’d finished. 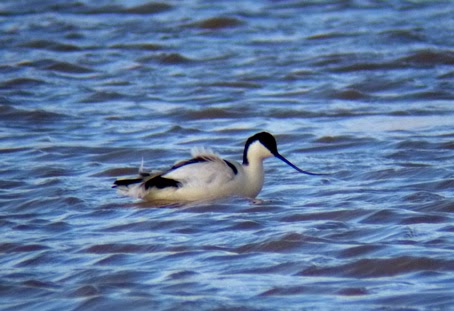 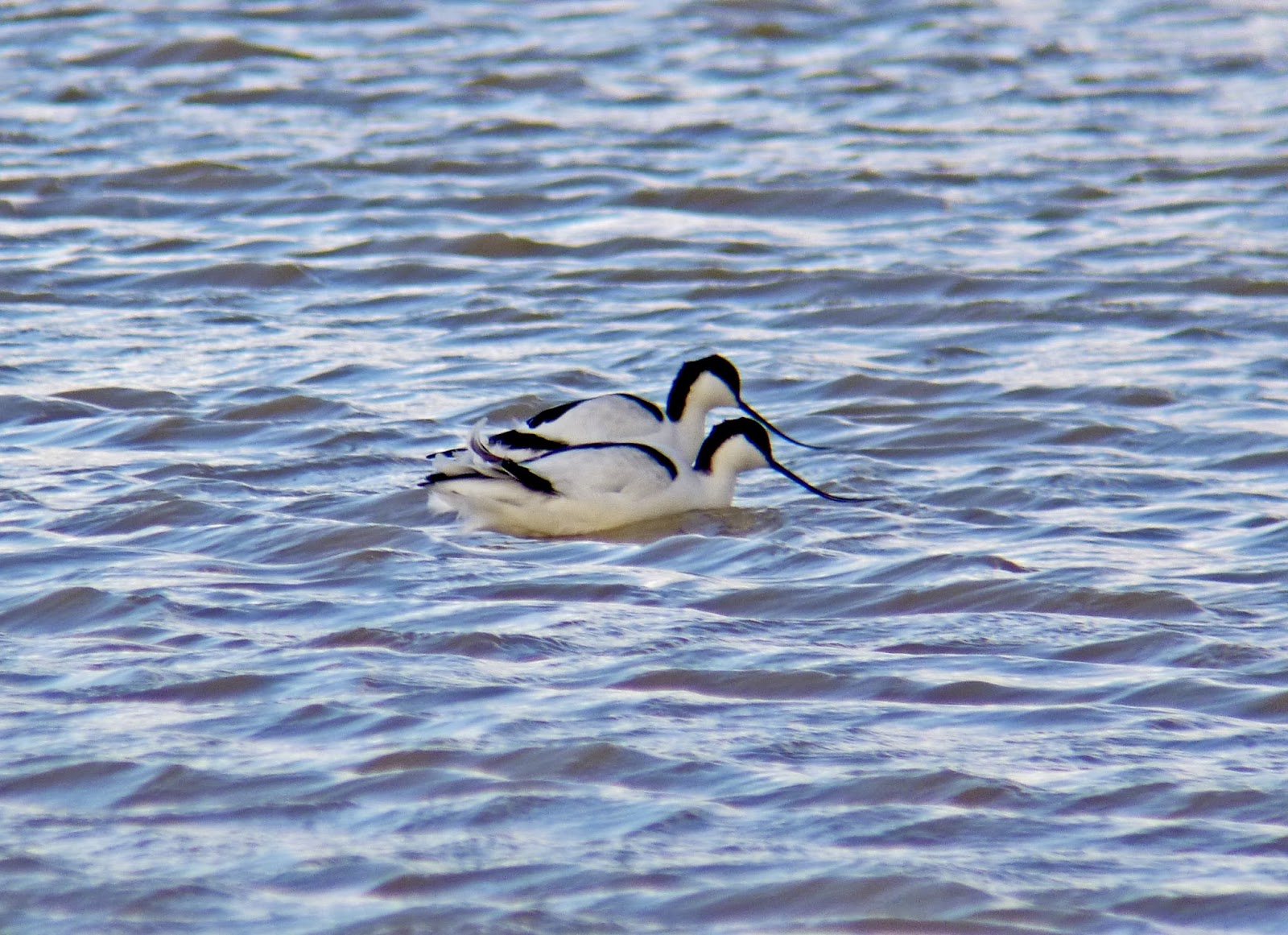 I’d never seen so many Lapwings altogether (several hundred) and there were hundreds of Greylag geese, Shovelers, Teal, some Wigeon and, I spotted four Shelduck flying away but couldn’t find them again, also a very pale Buzzard which perched for a long time on a ruined adobe 'palomar' (dovecot).
Unfortunately the sheltered hides are only open at the weekend so I’m sure there was far more to see from a better vantage-point but no doubt I’ll be back.

Posted by Birding in Spain's Wild West at 12:43 am No comments:

The White Storks are arriving...

On Wednesday evening we saw one of our White Storks on its nest on the church tower: no doubt the male who'll be fixing up the nest ready for the arrival of his mate.  Amazing to think that they may not have seen each other since last August, when they headed off South.  I'm looking forward to the bill clapping when she finally arrives - it's always a joy to hear and anticipates the coming of Spring although still a long way off.

This year he's come about three weeks earlier than usual, and others have also arrived in the region, so it must be that wherever they were the food's run out.  Worrying. 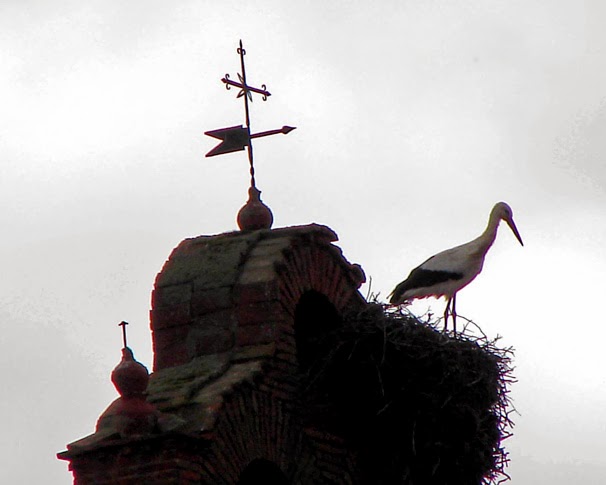 This evening in the vegetable patch a group of Long-tailed tits catching mosquitoes hatched due to the unseasonably mild weather.  It's got up to 18ºC the last few days.


Posted by Birding in Spain's Wild West at 10:09 pm No comments:

A break in the wintry weather

Yesterday we took advantage of a break in the rainy weather to take a stroll down to our vegetable plot and see who was around.  The Red Partridge was calling and Cetti's Warbler was down by the stream making itself heard but not seen.  The Ravens and Crows were getting territorial again but the Azure-winged magpies are still flying around in flocks, as shy and as stunning as ever.
Meanwhile back home our birdfeeder attracts the local Black Redstart couple (they nest in our back yard in an old swallow nest) a Robin, a pair of Collared Doves and a dozen or so House Sparrows...

Posted by Birding in Spain's Wild West at 9:07 pm No comments:

During 2013 I was lucky enough to see some birds I’d not seen before (marked with *): not exactly rarities but very special for me anyway.


Here are a few highlights, as well as migration dates, all seen in our local patch unless stated and within the provinces of Salamanca and Ávila:

Crested Tit* and Firecrest in the Sierra de Francia
Golden Eagle (1st winter) outside our village
Hoopoe close to home (seen frecuently in winter)
Over 1100 Crane flying in to roost on shores of Local reservoir. They remained in the area until end of February

Spanish Sparrows nest in garden behind our house 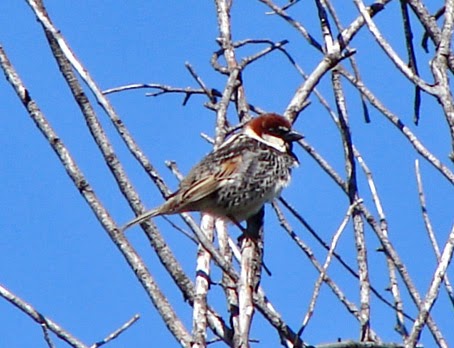 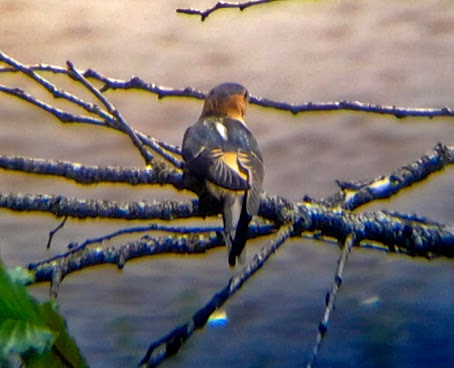 Sadly the chicks are eaten by a large Ladder Snake which I remove in a sack to a safe distance from the village..
Quail near village: sadly very few in area due to overhunting
Eagle Owl chicks with parent in their nest on a rocky outcrop above reservoir
Black Tern* over reservoir 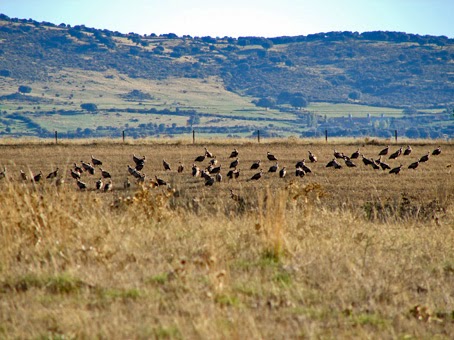 Posted by Birding in Spain's Wild West at 12:59 am No comments: