The months have flown past without finding the time or energy to write this blog, but it’s that time of year again, and I now have an imperative and it’s to do what I can to help my colleagues save our population of Harriers from the blades of a combine harvester.
During May I’ve been sitting out early morning fogs and afternoon heat hazes looking for signs of Hen and Montagu’s harrier breeding sites, alone or in the company of Alfonso or colleagues from the local Salamanca SEO Birdlife group.
Having located over 40 nests with chicks or eggs over a vast area of cereal country around Salamanca province, various teams of volunteers are working flat out against the clock to try and save as many chicks as possible as the farmers begin to harvest.


Farmers are contacted to ask them to leave unharvested a 5 x 5m area around each nest so the chicks can fledge.  The farmers are offered an incentive and given a campaign tee-shirt. Some are more co-operative than others, especially when they are made aware how useful a Harrier is as a natural controller of the ever expanding vole population present in the area.
We then have the task of putting fences around the nests so that the chicks are safe from predators once the crops are harvested. Sometimes they escape and we spend a good deal of time combing the area to try and find them.
Unhatched eggs need to be taken to incubators as the mothers will abandon an exposed nest.  All this is done by less than 20 volunteers spending hours in the field at temperatures of around 30ºC or more.
Last night a mini drama ensued when I found (by almost stepping on it) an undiscovered Montagu's nest after we’d finished fencing three others. 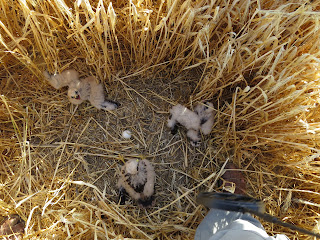 We had no choice but to guard it while one of the team went for more fencing... 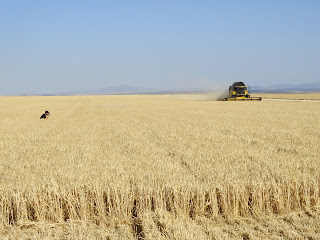 ...and meanwhile the combine harvester was getting closer... 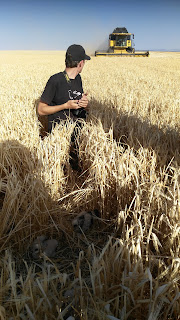 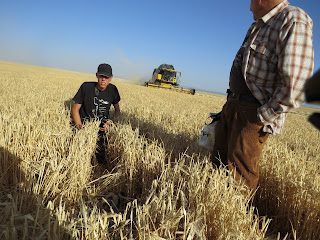 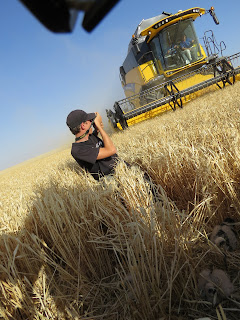 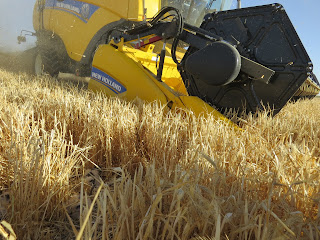 It passed us at less than a metre’s distance, on either side, no doubt the farmer wanting to show off his superior shaving skills with his new toy and by which time we could neither hear, see nor breathe properly.  Poor little chicks: you cans see them with their beaks open and no doubt terrified at the bottom of the photo.
The triangle of barley left over was pathetic but we did what we could to create a safe haven for them. 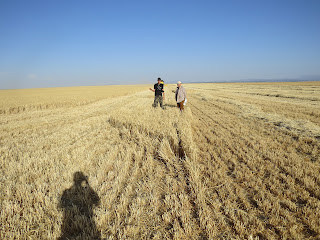 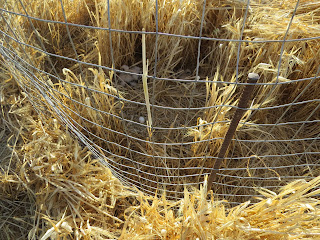 There’s a crowdfunding campaign to offset costs, especially materials, farmers' fees and food for chicks. You can help by following this link and sponsoring a chick etc.
https://www.verkami.com/projects/17197-campana-aguilucho
...and by spreading the word.

Apart from the Harriers whilst out there I’ve also seen many other interesting birds….

Posted by Birding in Spain's Wild West at 6:21 pm No comments: